﻿ Usri Basistha Whose womb is it anyway? October 6, 2021 https://www.nakedtruth.in/wp-content/uploads/2021/10/Whose-womb-is-it-anyway.jpg 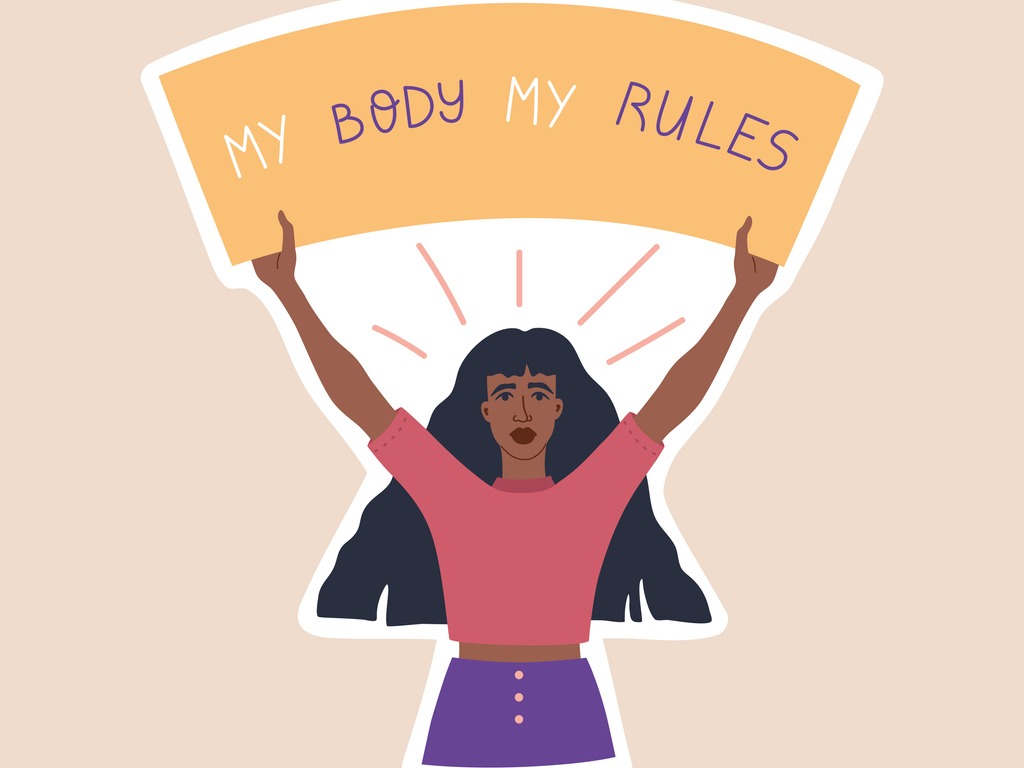 Although it has been around since the 1990s, I wasn’t quite aware of the historical context behind “International Safe Abortion Day”—observed on the 28th of September every year. This year, however, was different. Come end of September, I sat up and educated myself. What changed, you ask? Well, besides the little detail, that abortion laws directly affect me—being a person with a womb—and having personally witnessed how malpractices can abound due to legal loopholes around abortion, a few other things unfolded in gradual succession.

About this time last year, I finally picked up Margaret Atwood’s “The Handmaid’s Tale”. A dystopian novel, where a totalitarian regime, Republic of Gilead, usurps the US government. Among other things in Gilead, women are stripped of their reproductive rights, and reduced to cattle. A class of them, ‘handmaids’ are trained to exclusively bear children. Generally a slow reader, I bored through this particular novel at record speed. Simply because I wanted it to end, like you wait for a particularly nerve-wracking horror film to end.

Exactly a year later, the dystopia seemed to bleed over from fiction to fact when new abortion laws were recently implemented in Texas. The law bans people from availing abortion in the state, if a heartbeat can be detected in the embryo. A contingency that can happen within 6 weeks of pregnancy, when some are not even aware that they’re pregnant. One might argue, Texas is just one of the fifty-odd states of the United States, but the ripple effects are being already felt.

It is unsettling to see the abortion debate raging strong in one of the global superpowers, so much so that liberal laws are being rolled back. After all, the legalities in the developed part of the globe set precedents for the rest to follow. Closer home, the Medical Termination of Pregnancy Act was amended earlier this year. Although as per the amendments, the gestation limit for abortion was increased to 24, from the 20 weeks allowed previously, it was clearly lacking in regards to providing pregnant people with greater agency. Indians might not require the permission of their spouses to get an abortion but still need the approval of one or multiple doctors, depending on when they request it. More often than not, medical paternalism—when a doctor decides a patient’s plea according to their own worldview—gets in the way of safe abortions.

As an individual of reproductive age, I am honestly mystified that abortion is up for contention anyway. What goes on with my womb should essentially be my business. It remains incomprehensible to me that this basic logic has escaped several lawmakers and passionate naysayers of abortion for decades. Which is occasion to broach the primary polarizing line that divides opinion in this discourse, into pro-choice and pro-life. Where the former group campaigns for the choice of the pregnant person, while the latter passionately espouse the rights of the foetus inside the person.

In print, the latter seems a noble set, champions and advocates of life. On greater scrutiny, more often than not, this group’s motivation is revealed to be rooted in draconian moralistic, socio-religious grounds. The contradictions in their arguments are also swiftly apparent, while defending the right to life, they trample upon an individual’s right to self-determination. Even if one were to overlook the speciousness of their opinions, the statistics are unequivocal. Lack of legal recourse does not stop people from availing abortion, it only increases illegal and unsafe abortions. India itself bears a huge toll of fatalities caused due to unsafe abortions. Restrictive laws have been simultaneously found to lead to greater maternal mortality, as well.

Given this stigma surrounding it, abortion laws throughout the world can be categorised by how much agency it accords to the person seeking it. While ideally, people should be allowed abortion simply because they choose to—73 countries provide abortion on request—India falls among the countries which permit abortion under physical and mental health grounds.

While the statistics are enough to infuriate any rational mind, it’s worth examining what perpetrates this antipathy towards abortion despite clear evidence showing its necessity. Social researchers and thinkers alike have outlined how girls are raised to consider marriage and motherhood as a natural progression of their life’s course.

In Atwood’s novel, people in Gilead greet each other with “Blessed be the fruit”, a biblical reference to the womb’s capacity to conceive. Atwood found fodder for her novel from the pervasive mainstream narrative that still ties the value of a woman to her life-bearing capabilities. No wonder, the role of motherhood is idealized and put on a pedestal, because that’s the highest pinnacle of achievement accorded to her, thanks to these gendered expectations.

What goes on with my womb should essentially be my business. It remains incomprehensible to me that this basic logic has escaped several lawmakers and passionate naysayers of abortion for decades. Which is occasion to broach the primary polarizing line that divides opinion in this discourse, into pro-choice and pro-life.

Christina Reighter, activist and writer, observes, “One persistent concept that I observed, existing in our language and our media, was that women are not only supposed to have children they are supposed to want to. This existed everywhere. It existed in the ways that adults spoke to me when they posed questions in the context of when: when you get married, when you have kids.” From our language to our pop media, this idea is incredibly ubiquitous. Girls are expected to aspire to motherhood, and mothers to be perfectly content within the role of nurturing their children. Women who do not fit into this popular structure are seen as anomalous exceptions, creatures worthy of concern and pity.

This implicit messaging became apparent to me when, within the space of a week, I saw two very different films tackling the issue of motherhood. First came “Mimi”, which is essentially supposed to be about surrogacy, but takes a detour from its own plot in its second half. Mimi, the eponymous character, begins as a wilful girl raising funds to shift to Mumbai and pursue her dreams of becoming a heroine. A concatenation of events leads her to become the surrogate mother for an American couple, who desert her midway through the pregnancy.

From being a girl who cannot stand the sight of children, Mimi has a dramatic change of heart. The scene where Mimi decides to continue her pregnancy is quite telling in its superfluous pro-life sentiments. The film changes tracks from addressing the issue of surrogacy to becoming a treatise on how embracing an unplanned pregnancy is the way to go. The concerned child grows up—from 4 months old to a 4 years old—within the span of a song as a montage shows Mimi enjoying the joys of motherhood.

The film squarely falls back on the age-old myth about how every free-spirited girl hides within her a Nirupa Roy, where just being pregnant will assure her motherhood instincts kick in magically. Somehow ‘ma ka pyaar’ is enough, and no thought is spared on the financial, emotional and physical responsibility of raising a child.

Mimi left me with a bad aftertaste, more so because it posed itself as a quirky take on motherhood while propagating age-old stereotypes. However, “Sara’s” turned out to be a much-needed palate cleanser. On the surface, it is a breezy slice-of-life take on a girl’s life, however, it aptly underlines the pressure a woman faces when expressing an unconventional stance on motherhood. The film smartly hides little gems about how the lack of awareness confuses the urban Indian woman. From the lack of proper sex education to the methodical hammering about motherhood coming “naturally” to a woman, the film explores various themes.

Sara, an aspiring filmmaker, gets married to her boyfriend simply because pre-marital sex leads to unnecessary drama. Thereon, she makes her priorities clear, she runs behind producers with a script that she wants to direct. Just when she finds one, she learns of an unplanned pregnancy. Just like Mimi, Sara has no knack towards children, but she’s self-aware to know exactly why children don’t fit into her life goals. Neither does the pregnancy change her mind, even as the people around her—from her persistent in-laws to her curious peers, and her generally supportive but secretly paternal husband—mount their pressure on her. In a scene towards the climax, Sara’s father equates her life to a script, saying people will have a lot of opinions about it, but she gets the final say about what happens in the end.

The most heartening thing about “Sara’s” is that it explores the flipside of unplanned pregnancies. Like Reighter notes, most of the reasons—although feminism reminds you don’t even need one—why people opt for abortions are not self-prioritizing. These factors range from the danger of passing on hereditary illnesses, anomalies with the foetus, pregnancy caused out of sexual violence, lack of access to resources, to legitimate concerns about overpopulation and climate change. In the light of these issues, the humanity of the people opting for abortions is restored.

Amrita Nandy, a scholar studying motherhood and choice, notes, “Traditionally, motherhood is considered to be the most fulfilling aspect of a woman’s life, but class and education open up horizons for women to see that there are many more ways of finding meaning and purpose in life.” A sentiment that is echoed by Sara’s doctor when he counsels her about her choice of abortion. Quite succinctly he remarks, “Better not be a parent than a bad parent.”

A sentiment that leads me down another road. Towards the end of her famous memoir, “Wild: From Lost to Found on the Pacific Crest Trail”—which is based upon her solo hike through the Pacific Crest Trail—Cheryl Strayed mentions an abortion she had earlier that year. Had she not gone through with that, she would have been giving birth instead of standing at the rim of the magnificent Crater Lake, one of the crown jewels of the PCT. Her decision to terminate her pregnancy gains more poignancy as her due date would have also coincided with her mother’s fiftieth birthday. Her mother, whose death at 45 was what originally spurred Strayed to go on this journey of self-discovery.

To those still harbouring doubt about the woman’s agency of her own womb, I leave Strayed’s candour—who’s incidentally a mother of two. Almost at the conclusion of her 1,100 mile long trail, Strayed confesses sombrely, while wanting to be a mother at some point, she doesn’t want to turn into her mother. Who without having the agency of choice—except “an illegal abortion in Denver”—first became a mother at nineteen, and lamented weeks before her premature death, “I never got to be in the driver’s seat of my own life”.