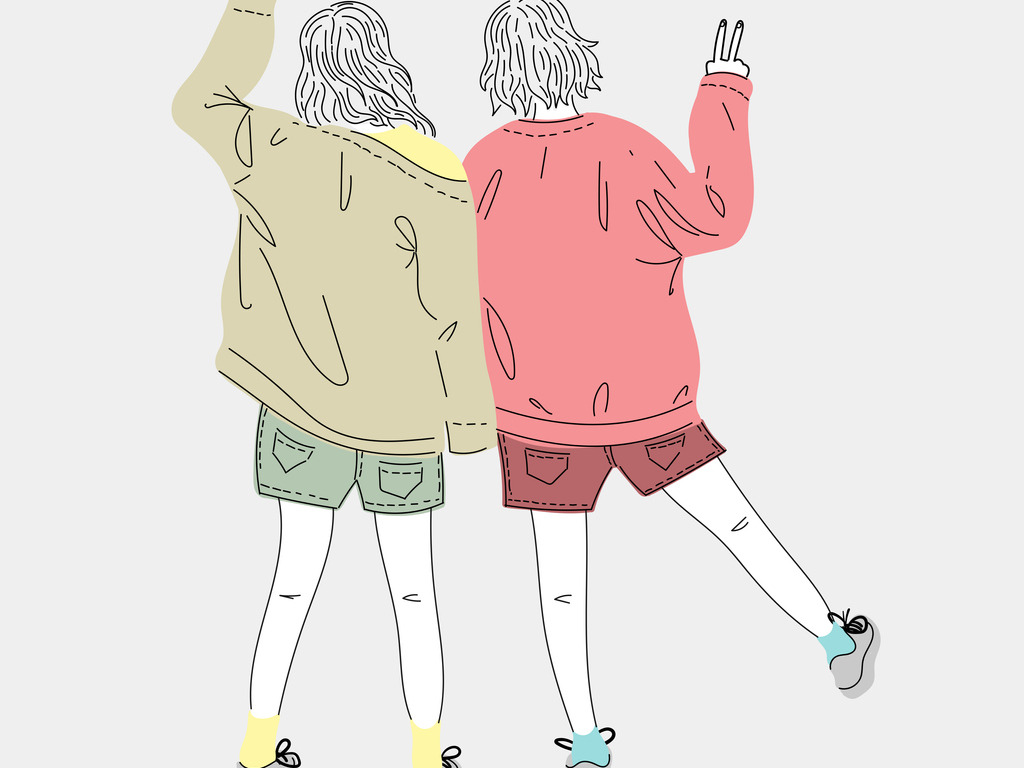 The concept of soulmates is too romanticized. I have always felt the same. And I have questions, too.

Why must two people who see each other as soulmates be romantically involved?

Why can’t two people who love each other platonically also be soulmates?

I was too young when Sex and the City was aired, but I had watched reruns later, and when the heroine of the show, Carrie said, “Maybe we can be each other’s soul mates” while talking about her friends, I could connect. There was an instant connection, like a radio catching on the perfect frequency. We clicked, me and my best friend.

I think about all this as I wait for her in this fast-food restaurant at ten in the night. Thank god for living in a metropolis where fast-food restaurants are still serving greasy fries for the night owls and nocturnal revelers. I have two large orders of milkshake before me as I watch a couple take the table beside me. The boy looks drunk, and the girl just looks at him in varying degrees of exasperation. He gives her puppy eyes, and she ends up smiling. I smile, maybe that is how they match.

“Hey,” I turn my head around and find best friend dragging the chair opposite to me. She sits down and beams, “Sorry, I didn’t mean to keep you waiting.”

I wave my hand. “Not a problem.” I push the glass of chocolate milkshake towards her, and say, “Here, your favorite.”

“One last time before you fly off.”

She presses her lips and takes the glass. “You know, I’ll be coming home every now and then, right?”

I laugh, “I know that, you, idiot. But you’re moving a whole continent away. It’s not like you can fly back on a whim?”

I drink my strawberry and chocolate milkshake, and let the silence fall. We don’t need words all the time to occupy our time. We never had to do or talk too much to have a good time. Even though, this silence is different because, after today, I may not see her in another year.

She is living in the city we were both born and grew up in. A great job opportunity is taking her across thousands of miles away. And it does feel odd to know that our conversations won’t be like this anymore. Time zone will now be the one which gets in between us.

“Keer,” she hums. “Did you fix your laptop camera?”

I cursed inside my head. “Ugh, yeah.”

“Uh huh, I know you’re lying now,” she narrows her eyes at me. I chuckle and she swats my forehead. “How will we Skype if you don’t get that ancient device of yours fixed?”

I touch my forehead since the spot she hit me actually smarts. “WhatsApp exists, you know.”

“I don’t know if WhatsApp works there.”

“WhatsApp works everywhere! Come on, Mark Zuckerberg won’t do that.”

She gives me an incredulous look as she gets to her feet. “You’re impossible. I will get some fries.”

She walks up to the counter, and I grin. In my defense, I am getting a new laptop soon actually. She was the one who called me here today. We had decided to not see her off at the airport, because one, I don’t live anywhere near her, and two, she didn’t want to cry too much. I mean, we have known each other since we were six years old, and now we are both pushing twenty-six. We have literally seen each other grow up.

Our friendship began pretty strangely too. We met each other in preschool when she had swooped in to help me fight some nasty boys in our class. I don’t remember why that fight began, but she covered me, and later, when the teacher punished all of us, she introduced herself. And we have been inseparable since.

We went to the same school too, our friend circles grew, but it didn’t matter. We could now talk to each other with our facial expressions alone, and we didn’t need words to know something was wrong with the other. Regardless of the issues we faced, we would work together to resolve them. Like, the time she needed help with her assignment, and I showed up at her doorstep with no questions asked (she did have to pay me back with cake, of course).

We went our separate ways in college. I chose English, she chose Computer Engineering. Our friend circles expanded further, and yet, we still found time to go hang out at our favorite beer cafe. We would head there and stay there for hours talking about everything and nothing.

It is not like, even now, we talk a lot, text each other a lot. But when she calls, I will pick up, and I will do the same. By now, we are comfortable in our familiarity.

She returns with a serving of medium fries and instantly digs in. We talk about moving to a new country, a new house, and how the dating pool would be like there. Somehow, our milkshakes get over, and when I look down at the tray, there’s only one last fry left. She laughs and pushes the tray towards me, “You take it.”

I shake my head, “Nah, you go ahead. Who knows? This could be the last french fry you ever eat.”

The last fry was a long one. I break it in half, and she laughs when I hand her the other piece. I pop my half in my mouth and grin, “Yeah, but I won’t be there judging your obsession with fries.”

She puts her head in her hand and smiles, “Yeah.” She nibbles on her half as she sighs, “I will miss you, you know.”

I would miss her too, but being the smartass that I was, I flick her forehead (I had to take revenge). “Are you getting sappy on me?” She yelps as I cackle, “It doesn’t suit you. But,” I sigh, “I will miss you too.”

We share a smile, and two decades of a relationship feels like this, like a late night at a fast-food chain with city muted outside. It is calming, familiar. I get to my feet and say, “I’m getting another packet of fries.” She frowns up at me, and I waggle my finger, “One last time for the road.”

My best friend doesn’t say anything just smiles, and maybe her eyes get a little wet, but being the smartass she equally is, she quips, “If I get a stomach ache from too much fries, I’ll throw you off a cliff.”

Surviving ‘negativity bias’ during the pandemic

Indian philosophy helps us see clearly, act wisely in an...