﻿ Ayush Garg These Maps And Charts Strike That Not A Single Country In The World Is Corruption-Free January 31, 2016 https://www.nakedtruth.in/wp-content/uploads/2016/01/Corruption3.jpg 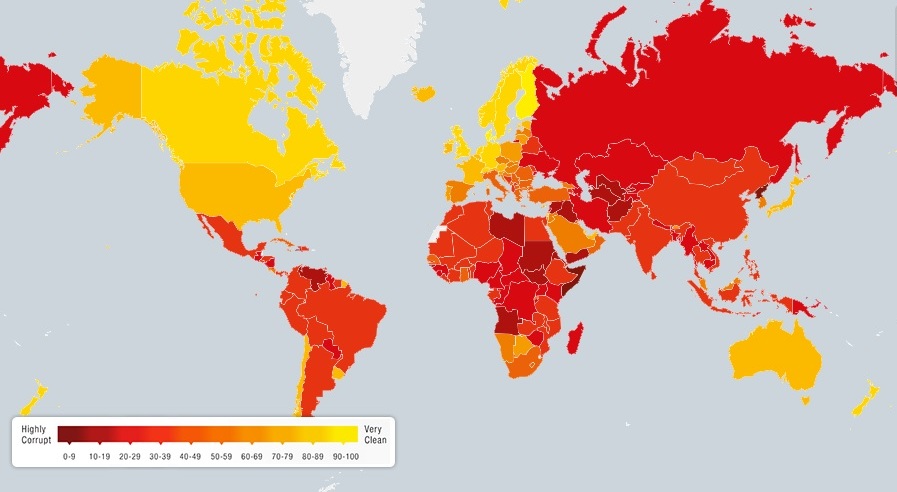 One of the main and major sector which is fueling corruption is the public sector. Public sector corruption is much more than the missing money which results to such devastating examples of life.

Based on the expert opinion, the Corruption Perceptions Index measures the perceived levels of public sector corruption worldwide.

The appalling fact that it came across that not even one single country, anywhere in the world, is corruption-free.

The Transparency International index is calculated using 12 different data sources from 11 different institutions that capture perceptions of corruption within the past two years.

The Corruption Perceptions Index 2015 ranked 169 countries for corruption, finding that the two countries tied with a score of eight out of 100.

The 2015 Corruption Perceptions Index clearly shows that corruption remains a blight around the world. But 2015 was also a year when people again took to the streets to protest corruption. People across the globe sent a strong signal to those in power: it is time to tackle grand corruption, says Jose Ugaz, Chair, Transparency International.

Brazil and Lesotho declined the most in the index, by five points each, in Brazil’s case partly due to the unfolding Petrobras scandal which lead to riots in the country.

In terms of what the world looks like by index score, the below map shows that African and Asian countries are typically more prone to corruption, at least by this year’s scores.

You can also view an interactive version of this map here.

And below the map tells how the scores have changed since the 2014 index, which shows that South America has shown the greatest decline of all continents.

You can also view an interactive version of this map here.

In Angola, 70 percent of the population live on US$2 a day or less. One in six children dies before the age of five – making it the deadliest place in the world to be a child. More than 150,000 children die each year. But not everyone’s suffering.

The disturbing fact is that five of the 10 most corrupt countries also rank among the 10 least peaceful places in the world.

“Corruption will stop only when we collectively fight against it,” says photographer AM Ahad of his sad portrait of the nine-year-old child worker in Bangladesh which tells that instead of going to the school, she spends her days sorting bottles at a recycling factory.

“It is crucial that we change the common mentality of accepting corruption and treat the crime as the terrible thing that it is.”

Budget 2016: A Plan To Boost The Startups

Taliban: A Defeated Cause Or A Rising Partner In The...