﻿ Dyuti Banerjee Loneliness has occurred, love too, in the pandemic August 17, 2021 https://www.nakedtruth.in/wp-content/uploads/2021/08/Love-and-Loneliness-in-the-Pandemic.jpg 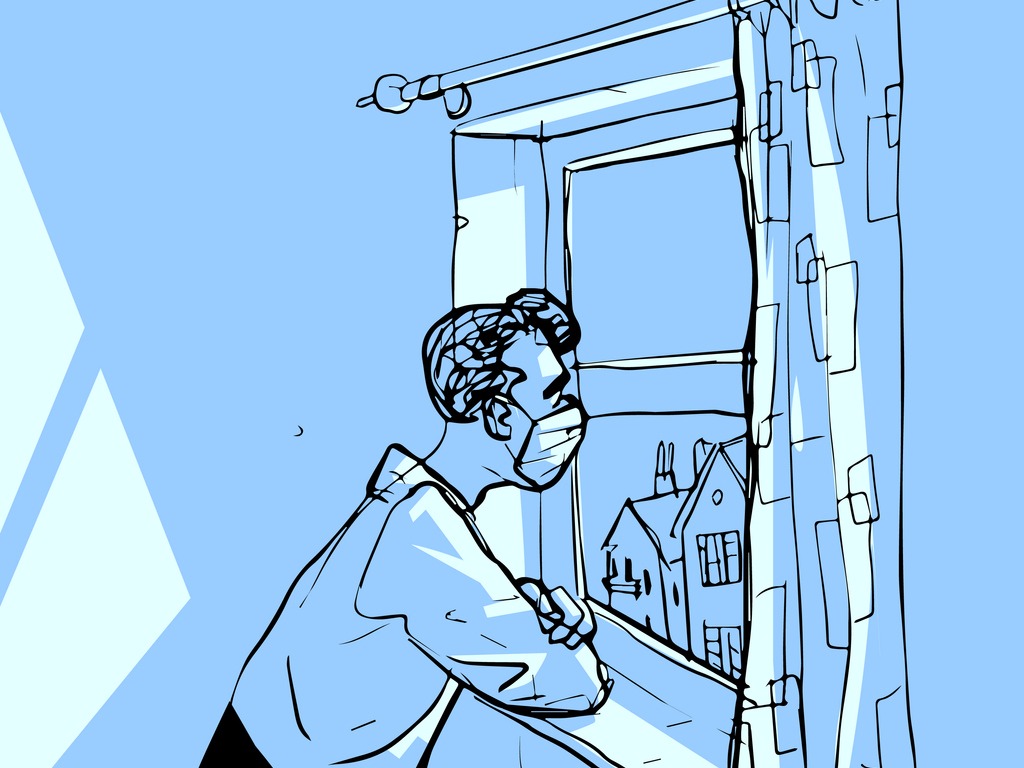 It was yet another Saturday for Rajani. Ever since he had retired, the days of the week had gradually ceased to matter. They stopped mattering altogether when Sucharita left. Sucharita was his wife. She died at the age of sixty one, right when they had thought to begin their retirement together.

Sucharita was a much loved English professor, who spent the first few months of her superannuation missing the professors’ common room and her students, batches and batches of them, and also counting all the investments jointly made with her husband. Quite a few of their LICs were to mature in another year, they had planned everything carefully.

The plan was simple. They had fallen in love quite late in life, at least what quantified as late in their time. Both were twenty seven. And had given up on love—Rajani, unlike Sucharita, had not even entertained much the thought of love—happening to them. But it happened. That too at the bus stop right behind the imposing Ramkrishna Mission Institute of Culture, that the city had conveniently shortened to just ‘Culture’.

Sucharita lived across the road. Rajani would be changing buses there. Rajani had been betrothed before, but the girl’s family had broken off the engagement, and Sucharita’s family had given up on the hope that their “aaiburo” daughter would ever get married. Probability was in their favour. And they got married a year later, more to the relief of their families. They were very aware of the years lost, precious years of golden youth that would never come back, and they lived every day with the zeal to make up for the lost time. In the end, they surely overcompensated.

Their plan was to live a balanced life—the sort of balance that educated working middle-class Bengalis must epitomise. They knew they were part of the bourgeoisie, but they were Communists at heart. Their living reflected that simple unaffected minimalism, that was also natural in any Calcutta household of the time. Their one luxury was a mahogany four poster with a black ornate headrest, which Rajani’s father had gifted to the newly married couple, in a departure from the practice where the bride’s father gave the bed. That was the second thing Sucharita would fuss about, the first thing being fond admonitions to her husband for his lack of orderliness. Inwardly she loved fussing over her absent-minded goofy husband, and inwardly he knew it too, but to each other, they liked to pretend it was the worst thing about each other.

Apart from this, they lived a life without pretences. They also had one thing not common in their time—a home to themselves. Rajani’s parents, being progressive and Brahmo, even insisted they live separately. All this was a bonus for Sucharita, who being born into a joint family, had always rued the sheer lack of space, the quiet needed to study, to read, to think. This suited her. And Rajani too bloomed, like the flower named after the night, rajanigandha.

The Rajanigandhas. Image is sourced from iStock by Getty Images.

Together, this banker and academic had an almost homogenously wonderful life. They saved diligently, putting off little luxuries for the autumn of their lives, the Europe tour, the vintage Turkish carpet, the Niagara trip, and they saved and invested for what would be their greatest adventure ever, and together. Yet they enjoyed the relative frugality with gusto, even their waiting gave them joy, for they waited together. They were counting on retirement and old age to be the passport to all the desires of their lately blossomed youth. And then, abruptly, she counted herself out of it. Rajani felt a vague sense of betrayal even after a decade of his wife’s death.

Their marriage was such a content one, they never had a chance to rue their childlessness. In fact, till a decade after their marriage, they actively were trying not to have children, and thereafter, things had slowed down to a comfortable pace between them, so that trying was unnecessary. Yet now, seated on the divan spread out for convenience’s sake on the verandah, his customary cup of light black tea on the little charpoy with the white lacy tea cosy that were Sucharita’s legacies, he thought about the progeny that never happened. How would he/she/they be? He daydreamt often about this of late, ever since everything stopped. Just stopped. A death of sorts. Except that he was still here, and she wasn’t.

At least there could be someone in the house. To talk to. Or if they didn’t get along, then at least the noises of music blaring from behind a shut door, the sound of fast loud slippers on the stairs to the chhaad, the sound of plastic jars of biscuits being turned open in the dead of night, the hushed click of a lighter, maybe? In his head, he hoped for a loving, strong daughter, but his pragmatic mind, even in a daydream, rationalised that it would probably be a rebellious, angsty son, and that made him a little proud too. Genes and all.

He was acutely lonely. Not that he used to have a roaring social life, but with this lockdown, the imminent scope of one had effectively shut down. It amazed him how he, who had been waiting to die with the eagerness of meeting a loved one, had become careful not to contract the virus. The one maid they had came from Baruipur, and with the trains shut, could not come. Besides, it was not safe.

‘Safe,’ how he, they had abhorred the word in the tumultuous decade in which they began their life together. That fire, that zeal to act, to live, to be, Sucharita seemed to have taken away with her. He found himself choosing safety, as he stared at the spray bottles filled with hand sanitisers bought in bulk. He found himself washing his hands clean of his youth, of energy, of Sucharita’s energy. He realised he now missed her more than he had loved her. It filled him with an even greater emptiness than her absence.

Before the pandemic struck, he was unaware of this sharp sense of vacuity. He had been lonely before, but this oblong-shaped vacuity that ate into his brain, his every muscle, this was new. Mittir’s son had forced him to buy a smartphone, but it was all too complicated.

Mittir, three years his junior, had lost his wife too, and in pre-Covid days, would spend most of his days with Rajani. He was adept with smartphones, and would check his WhatsApp messages for him. It was a window into normal society for this anachronistic man. Now Mittir was quarantined at home. His son and daughter-in-law had contracted Covid during the second surge of the pandemic. He was still asymptomatic and negative, but in great panic. His visits to his friend and neighbour, Rajani, had been going irregular since the onset of the first wave. For Rajani this meant being free of the internet completely, and that the virus had hit too close to home.

He wondered how Sucharita would have dealt with a pandemic. He couldn’t imagine her without her Gariahat market hauls. Or the off-white, almost bland handloom sarees that she used to wear ever since she had crossed the threshold of the forties. She used to wipe her forehead sweat with it, a basket-like bag in the crook of her arm, as she deftly turned the fish, checking for freshness under its gills. Yet she wasn’t much of a foodie herself. Neither was Rajani. But he had come to learn that this too was one of the countless ways she loved him by—so that he would not miss out on the best fare. Bazaar was her one indulgence.

An itch near his shin brought Rajani out of his reverie. Mosquitoes. Evening already. He had to switch on the lights, but he just didn’t feel like getting up from bed. He was really prone to these reveries nowadays. He wasn’t even sure which was a memory, and which, a dream. He couldn’t remember the last time he had eaten, but he wasn’t hungry. Not in the least. A strange satiety filled him. His mind was suddenly clear. Young. He had been sweating, but the evening breeze was now cool to his heated forehead and he drank the air thirstily, after what seemed like ages.

And then he smelt it. Smelt her. That smell of detergent and turmeric and Pond’s Dreamflower talcum powder, in the nape of her neck, under her khopa, in the folds of her saree, almost urgent, like in their rosy days. That smell was enough to make him jump up from bed, there was a buoyancy in his old limbs, he did not feel old. He was thirty once again, and she, ever so finely blossomed.

At once, Hemanta Mukherjee’s beautiful baritone played on the defunct cassette player, and there was a wind, the kind of evening wind that speaks only to lovers. He was surprised that it still chose to speak to him, half-senile, frail and faded as he was. That wind made him churn for her. He was surprised that his old heart still remembered to be stirred like this.

He walked out onto the balcony, laid his palms on the old banister, let the coolness of the cement seep into his warm skin. It felt like respite, like final exams ending, like finishing a run. She was unbearably close. He told himself, I am hallucinating. This is not real. Except that it felt real. It felt like a culmination he had been waiting for, all his life. A perfect fulfilment. He was giddy with joy.

She reached for his hand, her fair, slightly veiny hand on his larger, browner one, and she bent into him, her head on his left shoulder, so that she could be close to his heartbeat, as she would say in their younger days of love. He had never felt more complete. And she had not been this content.

The next day, a telephone went unanswered through the day. The Mittirs were the first to find out.

As the white sombre van vanished at the corner of the street, they felt guilty for not taking heed earlier. Mittir would miss his friend. Later he would reminisce to the neighbours how his friend stayed quiet even as the symptoms grew stronger. But he never went out much. Could be the maid, no? Sad lonely old man, they all rued, as they stared at the white chequered gamchha on the empty balcony balustrade.

They didn’t see the middle-aged couple looking into a brazen orange sunset, their faces awash with the kind of bliss that only comes with knowing certainty in love.

They didn’t hear the songs that played on their cassette player, they didn’t smell the rajanigandha sticks that stayed fresh long after the memorial services were over, that stood fragrant testimony to a very ordinary love, that lived.