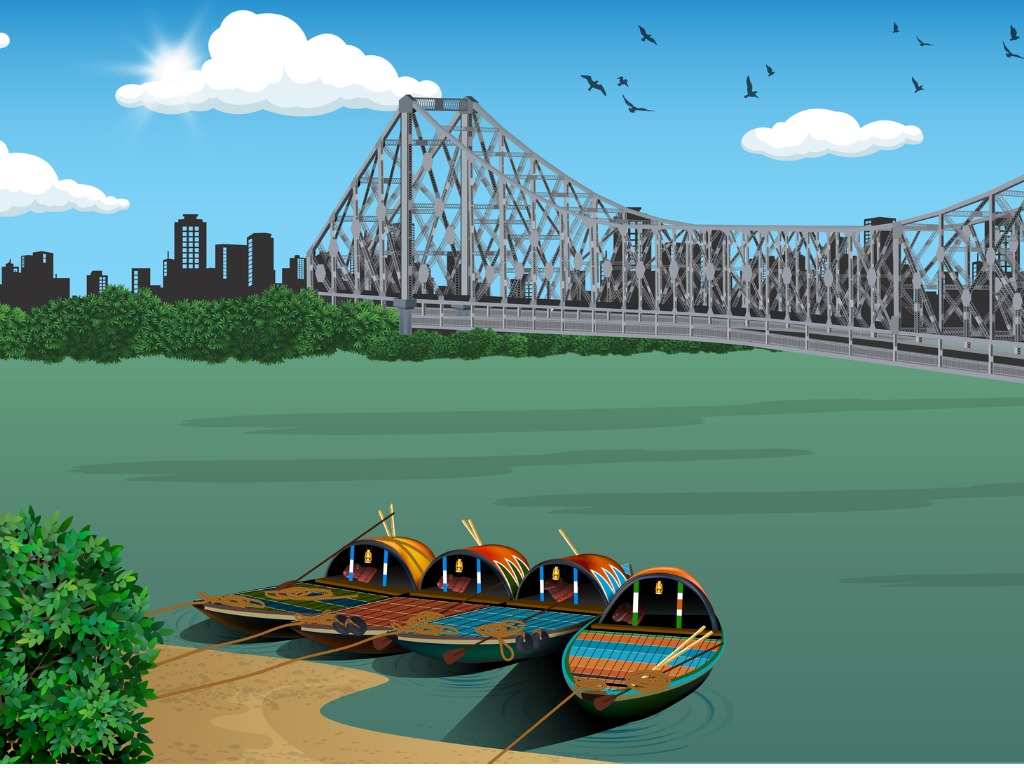 A city with a river is a lucky city. They call it names the city often knows nothing of or cares for. City of dreams, city of love, city of joy. It is lucky not because the river is pasted across it like a smile drawn across a chalk-sketched face with an old murky crayon, or because on cold quiet winter mornings, a mist rises from the surface of the river blending the difference between water and ether, dream and real, exactly the sort of space one can go to especially if one plans never to return. It is lucky for other reasons. Reasons as inexplicable as the feeling that comes from fingers intertwined on lazy suburban roads with one’s lover’s, as immediately satisfying as the first morsel of rice after a long train journey, as complete as poetry.

A city such as this knows a lot. And like every true scholar, feels ignorant of its own knowledge. Photographers take pictures of its riversides, its decaying houses, its bridges, streets, shops, restaurants, people. Poets write about its endless summers, its bustling winters, its mucky rains. Lovers love, and smokers smoke. Tea, the colour of caramel, fills earthen cups and a mischievously esoteric winter air with soft smoke the smell of cardamom and cigarettes. Voices rise and ebb like a singing bowl in a dark rich quiet Buddhist monastery. Except in this city, the endless noise is the quietude, the background to all other noises.

This noise is the noise of the black typeface on the flimsy sheets of newspapers thrown in with perfect careless precision on waiting balconies softly warming up in the fading cold of a reluctant winter. The noise of fish fins grating against the blade, the noise of coins spattered with blood and fish bile, the noise of death becoming food. Also, the noise of raincoats squelching against soggy backpacks and sweaty school uniforms.

It is exactly such a city that slouches on tired Tuesday mornings, weariness in the knots on its pectoral muscles, which familiar fingers may ease out, but the fingers, they are an elusive lot. Desire fuddles memories, and memory fuddles desires. Which is which and what is what lose their translucent membranes, and silvery plasma escapes, making fulfilment a tantalizing wait. Godot never comes, even though he comes quite close, his fraying beige-grey shirt collar almost within the thumb and the index finger, the coarse buckram of the collar stiffly brushing by, the sensation sharp and rough against the surprised skin. But the fingers cannot hold.

It is such a city that boards on muggy Saturday mornings, a bus full of cities to see the sea, always within reach, incongruous beach hats atop receding hairlines, the multicoloured leggings that were a bad buy unabashedly sticking out from under modest-enough dresses bought only for the purpose of this beach-visit, a horrible movie always playing on the bus TV always labelled ‘Video No Risk’, and long roads filled with milestones and the excitement of a day-long holiday. The weekend is its break from the orange cards punched twice daily on the metro, the change received from calloused bus-conductor hands, the office lunches in stainless steel tiffin boxes stained with leftover curry from last night’s dinner, that close with a loud metallic clasp. My city lives in its escapes from itself. Quite like I do, and you do.

This city knows how to wait. It waits, a young eighteen-year-old, to tell a pimply bespectacled girl in class, he loves her; waits so long that someone else tells her that instead, and he waits watching them hold hands, and sing songs of revolution as the afternoon wears on, and the sun changes its colours. It waits as the flatbread fries on the large black griddle, as the egg cracked on it, fries, waiting to give precise preference-patterns, no-sauce, only lemon-onions-chillies. It waits in long lines, and waits some more, just to get that one seat by the bus window with a footrest, and a view of the river.

Yet it is a lucky city. Not because there’s fulfilment lurking in its secret alcoves, unawares. More often than not, there is frustration, anger, bitter sour irritation running down the freshly sprouted hairs on waxed arms, there is sweat and frowns and twitchy disappointed shoulders, there are the anxieties of being. Unlike other cities that this city sees, through other people’s memories and dreams, this city must love with all its imagination, its soul pregnant with so much love it cannot spend. Because loving in this city must be done in secret, behind walls and doors and battlements, because to be caught loving is dreadful damnation. Yet this city loves with the joy that only lovers are privy to, loves with its windows clammed shut, loves behind wide-open umbrellas, loves in hotel rooms that routinely defy sunlight. This city loves politely, through platefuls of meals, and walks and cheap poetry on phone screens. This city can wait, and lives on the hope of a silver lining, the hope of a forever on the other side of the never-land that it is. For the heart to hold so much hope alone, it is lucky. The river helps too. It is often a co-conspirator in the secret romances this city weaves, its air thick with the gossamer of spiderwebs, that break into rainbows in the sun.

And when the heart grows too heavy carrying the secret weight of love, it grows old. And the hungry love that gnawed at the throat and the base of the skull and the trachea and the entrails till the soul could not hold it in, turns to handwoven bags, washed every day with blue-white detergent powder, taken off the doorknob on the kitchen door that exists only for this sole purpose, and taken, folded under an armpit, to the market.

This love then seeks elusive salvation in the red of fish gills, the remnants of soil in the blind eyes of potatoes, the blue veins of crusty prawns, the green of coriander stashed free of cost, like a prize at sports day in school—each a metaphor for all that love that couldn’t be loved wholly in one lifetime, all that love that would have to be carried forward in the next lifetime and the next and the next and so on. This city feeds on fish, cut into roundels and fried and curried with potatoes, wolves down fistfuls of rice made yellow with fishcurry, like it feeds on hope.

So long as there is the river, there will be fishcurry and hope. That will be enough to defer fulfilment—of its dreams, of its loves, of its desires. Enough to live on. This city has few needs, and it knows how to make do with less. It knows, and so it is lucky. And so long as it does not forget, it will be lucky still, lucky enough for poets and lovers and dreamers to still call it home even under relentlessly white-hot summer skies. We will blame the luck on the river that flows through, like electricity, and as necessary.

Crip Time: Defying normative linear time and accepting what my...