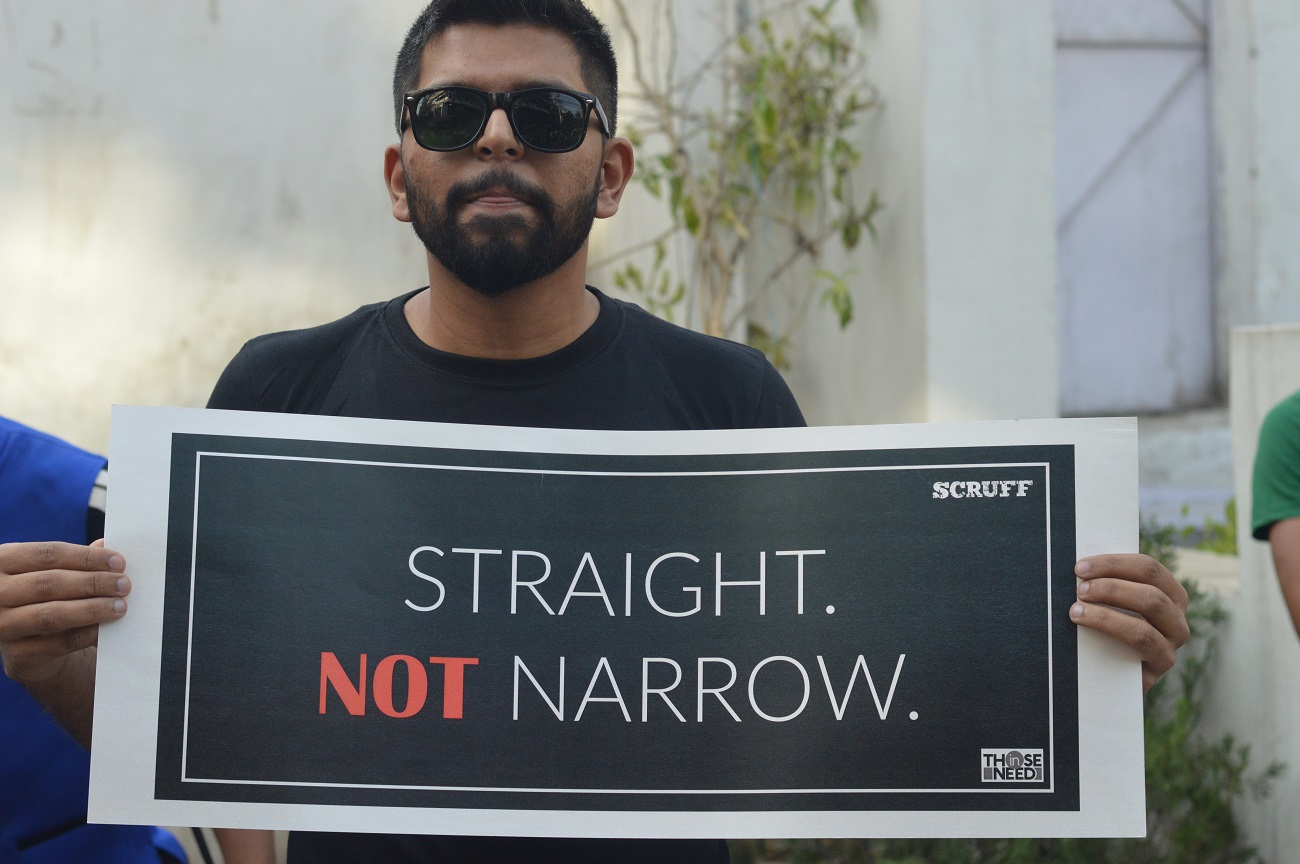 Public performances are a fantastic way to interact with the crowd. If you were anywhere in Hauz Khas Village last to last weekend, you would have agreed to that. A group of dancers broke out in a vibrant foot-tapping performance, quite to the surprise of those who frequent the village.

The dancers were part of an LGBTQ flashmob that decided to add colour to the streets of Delhi in an attempt to break barriers. To the beats of the dholak and the claps of the onlookers they danced away fear, shame and stereotype, and embraced who they are.

It all started with a bunch of people standing around the alley holding placards that read:

“I am homosexual. And it’s not a choice.”

“I am Homosexual. I am not attracted to everyone of same sex.”

And some of the quirkiest ones,

“I am Straight. Not Narrow.”

“I am homosexual. Me getting intimate doesn’t cause earthquakes.”

So the dialogue had already started. Onlookers stopped to read, tried to join the dots and seemed curious. But when the beats of the dholak started and the dancers began their vibrant performance everyone stopped to watch and cheer.

The event, it turned out was organised by SCRUFF (a gay dating app) along with a non-profit organisation Those In Need, which works for the welfare of minorities. The agenda was not just to create visibility but also start a dialogue about the LGBTQ community.

After the performance was over, the participants gathered around and shared their experience, accepted questions from the crowd, answered dutifully and even celebrated the positive change that has come about in the past few years because of a continuous effort to highlight the plight, agendas and rights of the community.

The event ended having a large banner with a message saying, “We are here. We are Queer. We are not a stereotype.”

Some of the participants even spoke about how it was easier to interact with their parents now and how they found better social acceptance.

But even if one were to complain about the limited impact of south Delhi events, they can’t refute that collective impact such a movement has as a whole on the country.

A stark example is Lucknow which hosted its first ever pride parade on the 2nd of April this year. The 1.5 km walk from Sikendarbagh crossing to Gandhi Park at Hazratganj witnessed a splendid footfall and a collective Indian support as activists from Mumbai, Kolkata, Delhi, Bangalore and elsewhere joined Lucknow in the celebrations.

Times they sure are changing, but as Ashok Row Kavi, the chairman of Humsafar Trust, told TOI during an interview, the Gay culture was quite prominently a part of the Indian social system until British interference suppressed it forcefully.

“We are only keeping the tradition alive though the modern Indian political class is ashamed of it,” he said.

So before the ‘protectors’ of Indian culture blame the west, let’s conclude by saying we are only going back to our sanskari roots. This also makes us ponder, why walking 2 kms every year is so important for the LGBT community.

How Content Marketers Are The Underdogs Of Digital Media

Why Millennials Are In A Hurry But Good At Work