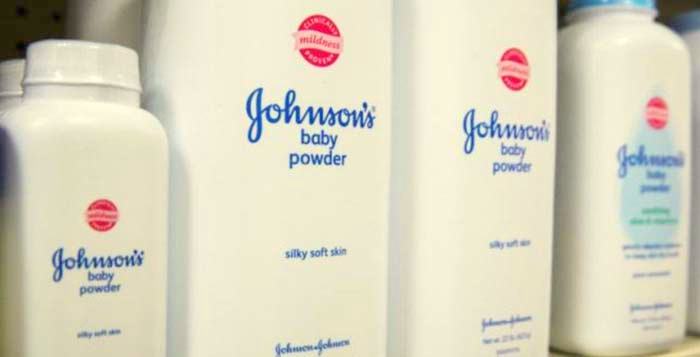 What would a talcum powder cost us? Well, it can cost us our life, if you believe.

Johnson & Johnson baby powder and talcum based products could cause danger to your health. Who could have imagined this? A lady living in America, Jackie Fox has vehemently defended her stand that these talcum powders cause Ovarian Cancer.

But, she is no more, she died in 2015 and she was 62 years old. Fox died of Ovarian Cancer due to prolonged use of talcum powder manufactured by Johnson & Johnson.

When Jackie Fox was diagnosed with Cancer, she joined hands with many women to sue the company. They said the company had failed to inform consumers about the dangerous effects of their baby powder. Through trials, lawyers said that the company was well aware of possible risks that their products have when used for feminine hygiene.

Johnson & Johnson, the world’s largest manufacturer of healthcare products has been asked to pay $72 million to the customer’s family. $10 million as compensatory damages & $62 million as penalty charge has been declared.

The only thing the company could have done is put a warning on these products. But, the company chose not to.

In fact, in the statement given by their spokeswoman, it was clearly stated that the safety of their products like talcum powder has been supported by scientific evidence. Women have come forward to say that the company had long been aware of these risks but, they have refrained from warning their customers.

A pathologist had evidence that Fox had inflamed ovaries due to the talc, which then turned to cancer. If there are so many evidence how do companies carry on with the manufacturing of these products? Ultimately it is the choice of the customers to be away from such health harming products.

The link between ovarian cancer and talc first surfaced when talc was found incorporated in the tissue of women with the disease. Talc itself is a naturally occurring mineral — mostly made up of the elements magnesium, silicon, and oxygen — that, when ground up, absorbs moisture. Unfortunately, natural talc also sometimes contains asbestos, which, as schoolchildren and worried parents across the nation could tell you, is known to increase the risk of certain types of cancer.

But talcum products have been asbestos-free since the 1970s. So naturally occurring asbestos shouldn’t be a problem. This simply fails to resolve the situation.

There is a decline in the sale as more and more people are getting aware of these risks, evidence exists of strategies to get Africans and Hispanics to use the talcum powder.

J&J will surely appeal the verdict with all its might. Now it is only a matter of time to see these products out of the market or have a better proof stay in the market.

Yes, the company will vehemently defend its position but, looking at the number of cases, the protest and the present verdict, it seems demanding for the company to prove its point.

In a free economy and a capitalist set up, consumer is a king. Let’s see where this theory leads to, where the problem ends, how the problem gets resolved and more importantly, in whose favor. All hail, health!

State Of Health Emergency In Peru After Oil Spills Leaks...

“The King Of Bad Times”: Sweet Deal For Vijay Mallya...