﻿ Rashmi Malapur 11 Rarely Known Festivals But Celebrated With As Much Excitement As Diwali November 13, 2015 https://www.nakedtruth.in/wp-content/uploads/2015/11/Festival-Thaipusam.jpg 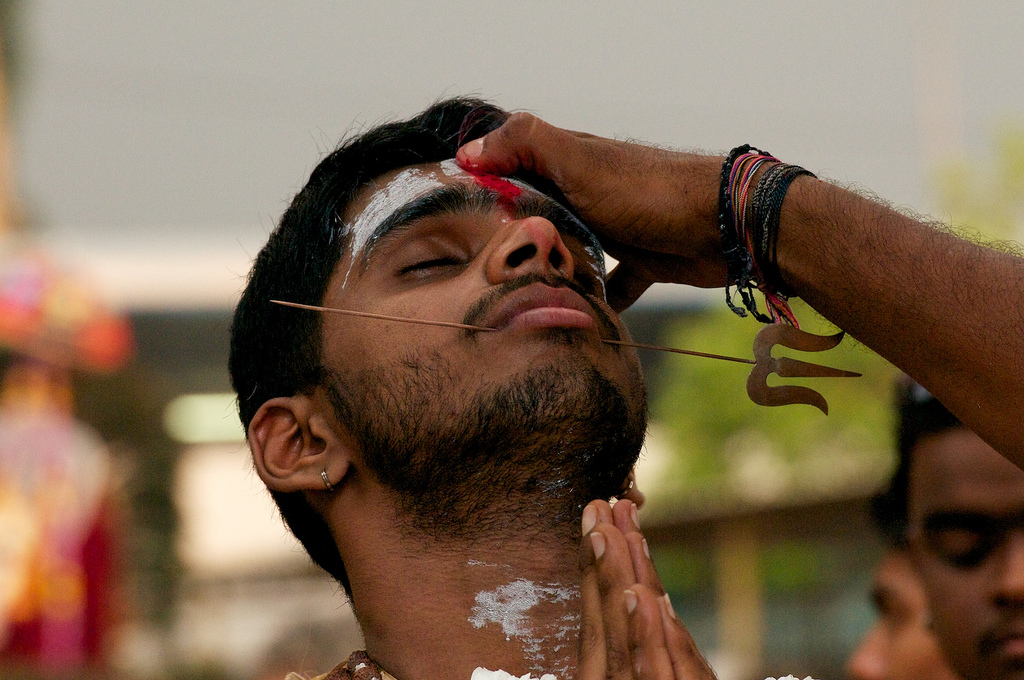 Diwali is a festival of lights that brightens up your life with positivity and happiness. Diwali marks the return of Lord Rama to Ayodhya after 14 years of exile and his victory over Ravana; it signifies the defeat of evil forces. Thus, it’s popularly believed that we have to overcome the negative forces within us to light the diya of positivity.

There are festivals around the world that are less heard of but, are celebrated with as much excitement and fervour. They are different and unusual, but believe me, as I share these 11 rare festivals, you would be totally surprised and be in complete awe with them.

Let us start with an Indian festival called Thaipusam Festival.

Piercing one’s body in different parts can be freaky, scary and, of course, painful. But, faith makes you surpass all boundaries.

In Thaipusam festival, which is predominantly celebrated by Tamilians in the month between January and February; staunch believers of Lord Murugan pray to him so that he removes the obstacles in their life. Lord Murugan is the son of Lord Shiva.

Thaipusam is celebrated with great pomp and festivities in Malaysia as the region has many Tamilians who migrated there to work on Rubber plantations. The devotees of Lord Murugan pierce their tongue through their cheeks with two skewers or spears. Some get their back pierced with hooks and carry contraptions known as Kavadis through which they carry the physical burden. It’s believed the more pain you endure the more blessed you are. Isn’t it simple only during sorrow, pain and testing times we remember God.

Castrillo de Murcia is a Spanish village that celebrates a yearly festival called El Colacho, which takes place after 60 days of Easter. It’s a bizarre ritual where parents whose children are born in the previous year bring their babies out and place them in a neat pillow on public street.

Men dressed in yellow costumes and masks whip the bystanders with switches. The fun begins when these men known as devils, jump over these rows of babies. When Christian babies are baptized, it’s believed that they get free from original sin.

Similarly, here in Spain, it’s believed when babies are jumped over they are relieved of their original sins. Subsequently, they are sprinkled with rose petals before their parents take them away.

Camel Wrestling festival of Turkey: Camels on the battleground

Can you imagine Camels wrestling, till one pins the other?

Would you believe that there are around 1,200 camel wrestlers in Turkey and even more surprising is that camels are specially bred for this festival? This is the camel wrestling festival held in Selcuk in the Aegean coast of Turkey. The female camel is paraded in front of the participants so that they get more determined to fight.

This surprise doesn’t end here, after the contest, the losing camel is left to run within the spectators, which causes panic and the spectators run for their life to avoid getting trampled.

Lopburi, is in the north of Bangkok and has a hell lot of monkeys residing in the town. Localites live in harmony with them, in fact, they hold a festival entirely dedicated to them. The Monkey Buffet Festival is celebrated in November, where around 4,000kgs of apples, bananas, cakes, etc are served in the complex of the Khmer temple of Pra Prang Sam Yot.

This is where the majority of the monkeys live. These monkeys are quite used to the presence of us humans, so it creates a funny scene when they snatch valuables or food. It’s a festival started by Yongyuth Kitwattananusont to boost tourism in the region.

Near Death festival: I almost died

Of course, they aren’t dead yet but, have been close to death. After this bizarre carrying of coffins, the almost dead rise and start to share their near-death experience with everyone.

Lantern Floating festival in Hawaii: Spread the light of hope

This is the festival that marks harmony and generates hope for the future. A generous thought that spreads the immense amount of hope and happiness on the Memorial Day by lighting lanterns set afloat in the Ala Moana Beach Park in Hawaii.

Floating lanterns look magical; as if stars have come down on earth and it signifies harmony. It’s a sight to witness with 40,000 visitors gathering the beach with around 6,000 lanterns lit. It is also an offering of gratitude for those who have left before us.

Festivals get interesting and rare around the world and this one is truly different. Hadak Matsuir is celebrated every year with nearly 10,000 participating at the Saidaiji Temple.

Men are dressed skimpily in loincloths as they battle to grab the lucky talisman (lucky sticks) thrown by the priest in the crowd. Every participant is asked to tuck a paper that mentions their name, blood type and contact number in the loincloth before the festival starts. It is held in the chilling temperature of January but it doesn’t deter these thousands of men.

This incredible festival is the largest festival of snow and ice around the world.

It is celebrated annually on 5th January in Harbin ‘The ice city’. Artistic snow sculptures are made out of snow and ice. Initially only localites participated in this artistic festival but, now its popularity has risen and it attracts many people around the world.

This funny festival in Japan is called the crying baby festival where the sumo wrestlers try to make babies cry. It’s a 400-year-old Japanese tradition at the Nakizumo festival.

The baby who breaks down first is the winner. It is a festival based on the Japanese tradition that ‘crying babies grow fast’. It is believed that the baby that sobs a lot on this occasion will be blessed with great health.

What is so great about gulping a fish? Well, it is a live fish and that is what is weird and scary. On last Sunday of February, people in Geraardsbergen in Belgium celebrate Krakelingen festival. It is a day that is remembered as the unsuccessful siege of the city. Localites swallow down their throat gray fishes or grondeling soaked in red wine. As they gulp it down, it wriggles a bit. What a freaky feeling, isn’t it? Festivals can truly get funny, interesting and weird.

Songkran festival marks the traditional Thai New Year, which is celebrated from 13th to 15th April. It’s the passing of Sun from one zodiac sign to another; to be specific it is when the Sun enter the sign of Ram or Aries. April is the hottest part of the year in Thailand and the festival is celebrated by throwing water at each other through water gun fights. Everyone is soaked in water and even buckets of water are poured on each other. The ritual also signifies cleaning the images of Buddha. It’s is a way to respect and bring good fortune to people. Isn’t it a bit similar to Holi?

Each culture has something to offer and festivals bring everyone together to entertain, spread hope and harmony. May this Diwali bring hope and happiness to everyone!