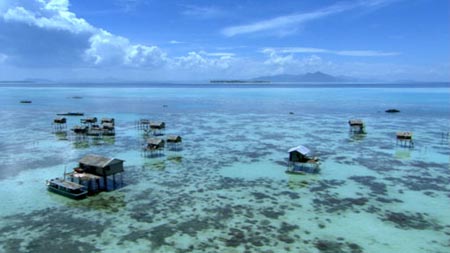 The land is our home and even though more than half of all the other species live over or under water, we humans are specifically known to be the mammals of land. I considered this statement to be true until I came across an interesting term; Sea Gypsies.

Now the word ‘gypsy’ was not new to me but the prefix ‘Sea’ added interest to it. A little more research opened up a series of new information for me. The world, that until a few days back was unknown to me, was now completely exposed for exploration. As I researched more I was able to unfold the mysteries hidden in these people.

These people, who have not only intimately involved themselves with the Sea, but also changed the relationship of man with water.

The Sama-Bajau tribe, commonly known as the sea gypsies, are seaborne people, found scattered throughout the coastal areas of South East Asia. They are known to speak the language of Bajau, which is a mix of the local language used in that area. These tribes can be classified in two terms; the boat dwellers and the others who live near the shores.

The boat dwellers consist of multiple families that together anchor at common sites. These families are interdependent and rely on each other for basic necessities like food, fishnets, and labour. They also divide their fishing routines and alternate members of each family go together to fish.

Due to their inter-dependency on water, their lifestyles and routine depend on the tides, lunar cycles, monsoonal and local winds, currents and migration of fish. These boat dwellers primarily generate revenue from the fish sale. The fish are then preserved by drying and salting method and later sold at the shore.

The others live in houses built on stilts in the shallow water. They use both, land as well as water resources but are more dependent on land as compared to the boat dwellers.

What’s even more interesting is the ability of the human body to adapt. The divers of these tribes can dive up to the depth of over 20 meters and stay underwater for several minutes in one single breath in search of fish. Moreover, recent researches show that the children of these water tribes are born with better underwater vision due to their adaptation to the liquid environment.

The diversity of the tribe makes it difficult to trace its origin. Even though their whereabouts are close to Philippines yet they have no connection with Philippines’ language.

Some suggest that the people of Bajau tribe were originally land dwellers. They were sent across in search of their princess, who was either kidnapped or swept away. Due to their inability to do so and out of fear of their King, they decided to remain nomadic for the rest of their lives, hence starting the water tribe of Bajau. Even though this story is accepted by the tribes, the real origin is still under controversy.

This little information made me realize the vastness of this world and the adaptability of the human body. One should never stop exploring or learning, as what the world holds goes beyond our sane imagination.