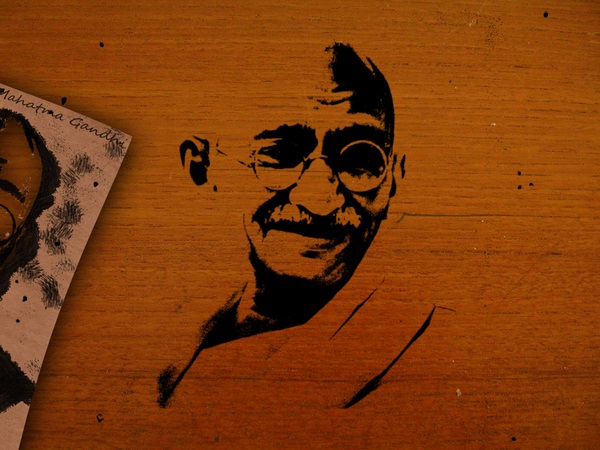 I am back, in fact, I was always there through my writings. But, no one bothered to remember me, except on a couple of days. What do I see? Is it India? Oops! I just stumbled over a huge pothole. Which city is this? People seem to be in a hurry to go somewhere. I stop by to ask a middle-aged man, which city is it, and he thinks I am mad. They don’t remember me. People have turned me into a ‘messiah’ and just an image on the currency notes. But, I was always one amongst them. I think I don’t look like myself anymore or they are in so much of a hurry, they fail to recognise me. I asked which city is this, to one young lad, he says, ‘Yeh hai Mumbai meri jaan’. Must be a new city, I thought I am in Bombay. The young lad informs that ‘Bombay’ is now renamed as ‘Mumbai’.

I decided to board a train so that I get to travel to see how my villages have fared since I left. When I asked how do I reach to Victoria Terminus? He says, ‘It’s not VT anymore, it is CST Chattrapati Shivaji Terminus’. I failed to understand why names have been changed? Has it made the place any better? I decided to go there and find out.

On the way to the station I ponder, ‘am I in the wrong city, this looks different.’ Dirty streets, jam packed trains, slums everywhere, plush cars on the streets, and immense pollution. What place is this? They are seen at every junction of the city. It reads McDonald’s. I see all young men and women yapping on something that looks like a box stuck on their ears and eating stuffed bread slices. It is sad, India transformed from ‘karmabhoomi’ (land of duty) to bhogbhumi (land of enjoyment). Nature produces everything that we want day after day. If each person doesn’t think greedily and takes only enough for himself, there would be no poverty in the world and no one would die of starvation.

I reached CST and I see a huge change in the station, but I observe only cosmetic changes and technology has hijacked our lives, making labour cheap. ‘Hey Ram’ what do I see; extreme type of vandalism in the name of religion and superstition; social activists and media reporters being murdered. They think that Swaraj will be the rule of the majority community. The essence of the word is lost; Hind Swaraj means; the rule of all people is the rule of justice. People have lost their tolerance. Today my people indulge in acts of vandalism if they differ in opinion.

My Indian brothers and sisters are in search of material comforts like the Europeans; we are aping them. Not able to stand there for even a moment, I travel with great hope to see how my villages have fared since independence.

I reached a village in Maharashtra and see that my farmers have become helpless. I see an old mother mourning her son’s death. He has committed suicide. Villagers live on subsistence level at the cost of the comforts that the city enjoy. Mounting debts, untimely rains and not able to financially support the family, compels the farmers to commit suicide. I had seen it way back before independence that we have to mechanise the least because, we have abundant labour that goes unutilised. Mills have taken away employment opportunities from the villagers. Cities rely on foreign goods while the foreign countries are dumping cheap and shoddy goods in the cities.

We already made a choice of the kind of India we wanted to create and are paying a huge price for it. We made a choice to concentrate on the cities that are a result of foreign domination. In fact, we needed to focus on villages and give them their rightful place.

Women have reached in every field and they are at par with men, at least at the outset this seems to be the truth. I see women everywhere in the city reaching to their place of work. So ultimately they got their rightful place, I am happy. But, wait a minute, what do I see; women being harassed at work? College students being harassed and raped by their male teachers and girls being eve teased? The rapists are scot free as the legal system is weak and their crime cannot be proved? Men then and now have not realised the truth in their behaviour towards women. Values in our society have degenerated. I mentioned in my book ‘India of my Dreams’ that dowry system should go and youth should revolutionize the way they think.

Things have changed, I don’t know for good or bad? Some improvements are visible but, to every improvement we have another challenge facing us.

Dejected I pick a newspaper in the hope to see something positive. The news reads, ‘Rising number of farmer’s suicide’ ‘Every thirty minutes a farmer in India commits suicide’, ‘FTII students on hunger strike’, ‘Tourist gang-raped’. I see that ‘Times of India’ covers ‘Times of India’ with pride, for so many years. Where is the change happening or happened?

I lose my hope of having ‘India of my Dreams’. My dream is shattered.

NOTE: This blogpost is a comparison of Gandhiji’s vision of India as described in ‘India of my Dreams’ and the present state of India. Irrespective of which government runs or rules the country, our challenges are still the same. In fact, we have more challenges today.