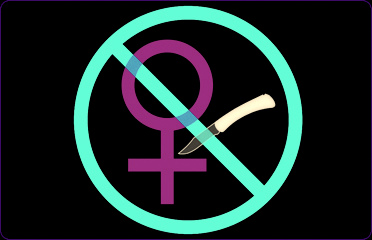 The Best Secret Of Modern World: A Serious Concern

“I am 60 years old now, but will remember that fateful day for the rest of my life.”

“I must have been around 7 years old when my mother told me we were going to my grandma’s house to spend the day with her.  When we reached my grandma’s house, my cousin (my mum’s sister’s daughter), who was a year younger than me, was also there. We were happy to meet each other.

Then, we were both led to a small room, which had a bed and asked to lie down. We kept asking, “Why?” Suddenly, a lady dressed in black came into the room. By now, my cousin and I were terrified, not aware of what was to follow.

Our dresses were pulled up and our panties pulled off, and we were asked to keep our legs apart.  There were our mothers and our aunts holding our legs apart and then I felt something cold being applied to my clitoris, and then to my horror, the lady in black actually held a scissor-like instrument and cut me there – I screamed and screamed, but no one seemed to care. Then this same thing was done to my cousin, who was right next to me on the same bed.”

I came across this article lately and this augmented my questioning to know more about FGM.

FGM, Female Genital Mutilation is practiced by the Dawoodi Bohra community, a sect of the Shia-Muslims, who are led by the Syedna.

They came to India in the 16th century from Yemen. This practice is being observed in several parts of the world since centuries.

Disgracefully, India is one of those countries where FGM is being practiced. Maharashtra and Gujarat are the two states of India where female genital mutilation is put into practice the most and this is done unlawfully.

There is no authentic proof or medical assurance of practicing FGM in the world history. The practice is more of societal cliché and apparent culture ethos in several communities in India.

Family honor, enhancing fertility, social acceptance and preservation of chastity are the vague reasons given for practicing FGM.

A girl is not socially accepted for marriage until she passes through this painful stage. It is a normal process for girls of Bohra community just like passing the phase of puberty. The eccentricity lies in the fact is that these girls are kept under an impression that this is practiced in every part of the world. But the true story is in juxtaposed.

The act is performed by a typical profile lady who is 75 years old or more, literate but uneducated.

The mutilation is usually performed with a razor, and the perpetrators often used abeer or kapurkanchi powder mixed with silk thread ashes to put over the clitoris after cutting takes place for its cooling effect and for its adhesive value.

No one has ever raised voice against this issue either because of fear or embarrassment. The practice of FGM in India and other parts of the world is a humiliation to mankind.

FGM is the best secret of the modern world. The Bohra community is well known for good business skills, but the world is still not akin to the inhumane face of this community.

Campaigns, awareness and implementation of rules are a pre-requisite to stop cruelty with females in patriarchate society.