﻿ Anupam Varma In Talks With Steven Bernard: A Movie Can Be Rewritten On The Editing Table November 25, 2015 https://www.nakedtruth.in/wp-content/uploads/2015/11/Steven-Bernard.jpg 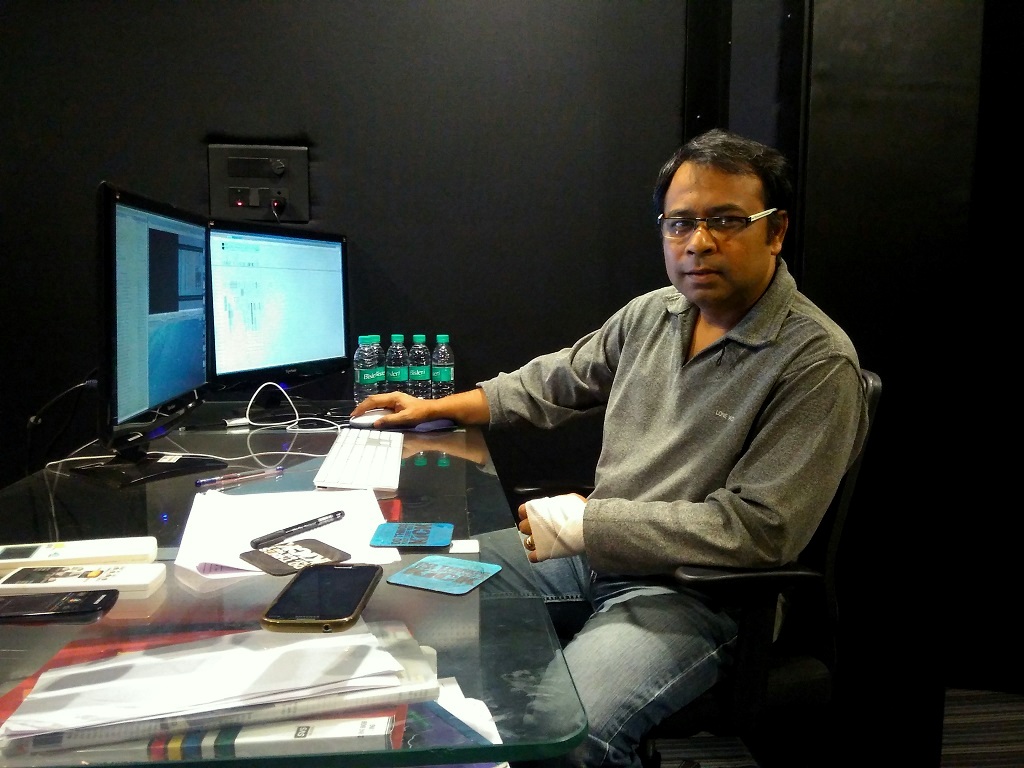 In Talks With Steven Bernard: A Movie Can Be Rewritten On The Editing Table

He has worked his magic on more than 35 movies, some of them superhits like Singham, Chennai Express, Singham Returns, the Golmaal series, and Ajab Prem Ki Ghazab Kahaani, and the recently released Welcome Back and Singh is Bling, and directors now trust him with their eyes closed.

He runs through hundreds of hours of raw footage to give his audience a perfect two-and-a-half-hour Bollywood flick, and yet he remains invisible to them.

Famous Bollywood film editor Steven Bernard, who was recently in town to explore business opportunities, spoke exclusively to Khaleej Times on his craft.

Q. What brings you to Dubai?

I am trying to set up a base in Dubai. I had been to Media City and wanted to see if it is possible to have a set-up here. Dubai is a very central place, and along with Abu Dhabi it has become a very popular destination for filmmakers. It is a land of opportunities.

Q. What makes Dubai so special?

The warmth, hospitality and welcoming attitude. There are millions of Indians living here, and local Emiratis love Bollywood too. The wonderful desert landscape, the palaces, the creek… they make Dubai a wonderful spot for shooting. Then there is the infrastructure, which is so supportive.

Dubai’s proximity to Mumbai, the hub of Bollywood, is another great advantage. Let us not forget about the shopping experience.

Additionally, the Thursday premieres in Dubai are great for generating publicity in India.

Q. When did you decide that you wanted to be a film editor?

During my childhood, whenever there was a programme or a function in my building, I used to gather all the footage and put it on a VCR. Then I would borrow another VCR from a friend and transfer whatever I felt was useful to the other cassette. I never knew this process was called editing. But it has been my passion ever since.

It is not very different. A director has a broad vision right from the first day and he knows the script inside out. He is the captain of the ship, and his crew members are those who have believed in the project as much as he has. So an editor follows more or less the same approach as the director.

Yes, certain things may change while shooting, or certain things may not have come across as desired on camera. In those circumstances, the editor can give his suggestions. Then decisions are taken whether or not to fill up those gaps and incorporate the needed changes.

Q. At what stage does an editor’s involvement in a movie begin?

Thankfully, I have been fortunate enough to be involved in movies right from the scripting stages. There are also editors who come into the picture when the shoot is over. The director hands them all the material on the editing table itself, and they have to get to work. The directors I have worked with have been very generous in that sense.

Q. What are the various steps involved in editing a film?

There may be 70-100 scenes in a movie, and every scene could have 10 to 100 shots. The editor takes a look once all the shots are arranged. A library of all the scenes is thus created which helps to locate and keep a track all the scenes and it becomes the basis for the edit of the film.

Q. How long does it take to edit a regular Bollywood movie?

It all depends on the genre of the movie. If it is a thriller or action, then it takes slightly longer. Thriller and action movies have more action-related scenes, and hence more shots.

Earlier movies were shot on negatives. So everyone worked in order to save material. That meant fewer cameras and, thus, fewer shots. But with digital technology, a director can use multiple cameras for multiple angles. This has increased the number of rushes that come to the table.

Earlier the average would be 100 hours of footage. Today it has gone up to 300 hours and more. So the editor now has to look at those 300 hours of footage and make a two-and-a-half-hour movie. If it is a lighter movie without much material, the movie can finish sooner. Usually, if a movie has been shot in 60 days, then the edit will take roughly 70-75 days. It all depends on how many hours of footage I have to see.

Q. While editing a movie, has it ever happened that you look at the rushes and realise it is not going to work? How do you approach the director? How does he react?

It hardly ever happens that after seeing the rushes you feel a movie is not going to work. One has heard the script and believed in the project right from the beginning. However, there have been occasions when something has been overlooked in the screenplay or writing, or at the time of shooting. Then one approaches the director and most of the times the changes are incorporated if they make a difference to the quality of the film.

However, having said that, I believe the edit room is not given that kind of importance and recognition it deserves, especially in the Hindi film industry, considering the contribution it makes in shaping a film for final release. I trust and believe that will change soon.

A story can be rewritten on the editing table, even after the script has been written and the whole film has been shot.

Q. Have any of your movies been rewritten on the editing table?

Yes, it has happened. Please don’t ask me names. It happens behind closed doors and it remains behind those doors. At the end of the day, it is the product that counts.

I enjoy editing all kinds of movies. I really admire Michael Kahn (Hollywood film editor) who often edits for Steven Spielberg. I love watching Ridley Scott. I love their work. Once a movie is on the editing table, it is just a movie, and as an editor you should have the craft to edit whatever movie comes your way. You just need to enjoy your work.

Q. Any particular genres you dislike?

The two genres I don’t touch are sex and horror. I have done these genres in the past, but now I don’t. I am a firm believer in God, and I have taken this step because of my belief. When I told people I wouldn’t do horror or sex movies, they said I would be out of the industry. But I stood by my decision and it has definitely paid off.

Q. Which genres are the most difficult to edit?

It all depends on the script. But yes, comedy movies require a lot of effort to make as well as to edit. You need to get the timing right. The right shot, the right angle, the right cut, they all play an important role in comedy movies.

Q. Are you able to enjoy a movie like an audience member, or do you just look at the movie as an editor and look for loopholes?

I love watching movies. I have sat down and watched movies for 24 hours straight. When I go to the cinema hall I just watch the film like a normal member of the audience. I will say whether I like it or not, like any other movie viewer. I will not pinpoint that this could have been done this way or that way. No one is perfect. There are mistakes in my work as well. It is easy to criticize. If I could get my movies back on the editing table, I would have edited them in a better manner.

Q. What about watching your own movies?

I love watching my movies on the Fridays when they are released. I like to be a part of the crowd just to see their reaction. It is a good learning process. You may think that a particular shot or scene is good, but the audience doesn’t react to it. This is especially true for comedy movies. You may think you have done great work on the editing table. But when the audience does not laugh, you know, you have failed. It is a lesson. The audience’s response is a great teacher.

Q. Do you think Hollywood has better film editors than India? Is their quality of editing better?

It is not fair to say that. Hollywood is a universal market and is at a higher scale compared to the Indian film industry. The Indian industry is also growing by leaps and bounds. Our cinema has improved over the decades. The technology and equipment are also more advanced per se.

There are certain subjects Hollywood specializes in and they have a certain budget. And, consequently, there is a certain quality of material the editor there gets to work with. It is tougher for Indian editors to work keeping in mind certain restraints they face. If you give Indian editors the same material that Hollywood editors get, you will see the same quality output.

Q. Any particular movie you wish would have come to your table for editing?

I would have loved to edit the Indiana Jones series, Schindler’s List, Bhaag Milkha Bhaag, Paan Singh Tomar, The Legend of Bhagat Singh. I would love to do a biopic, which is a real-life story. Until now that has not come my way and I am looking forward to editing a real-life story at some point.

Q. Any plans to take up direction?

I have been fortunate enough to work with talented and successful directors like Rajkumar Santoshi, Anees Bazmee, Vikram Bhatt, Rohit Shetty, Sajid-Farhad and Prabhu Deva. I have learnt a lot from them.

Editing has been and continues to be something I am passionate about. And someday, God willing, if I have a good script I would love to get into direction.