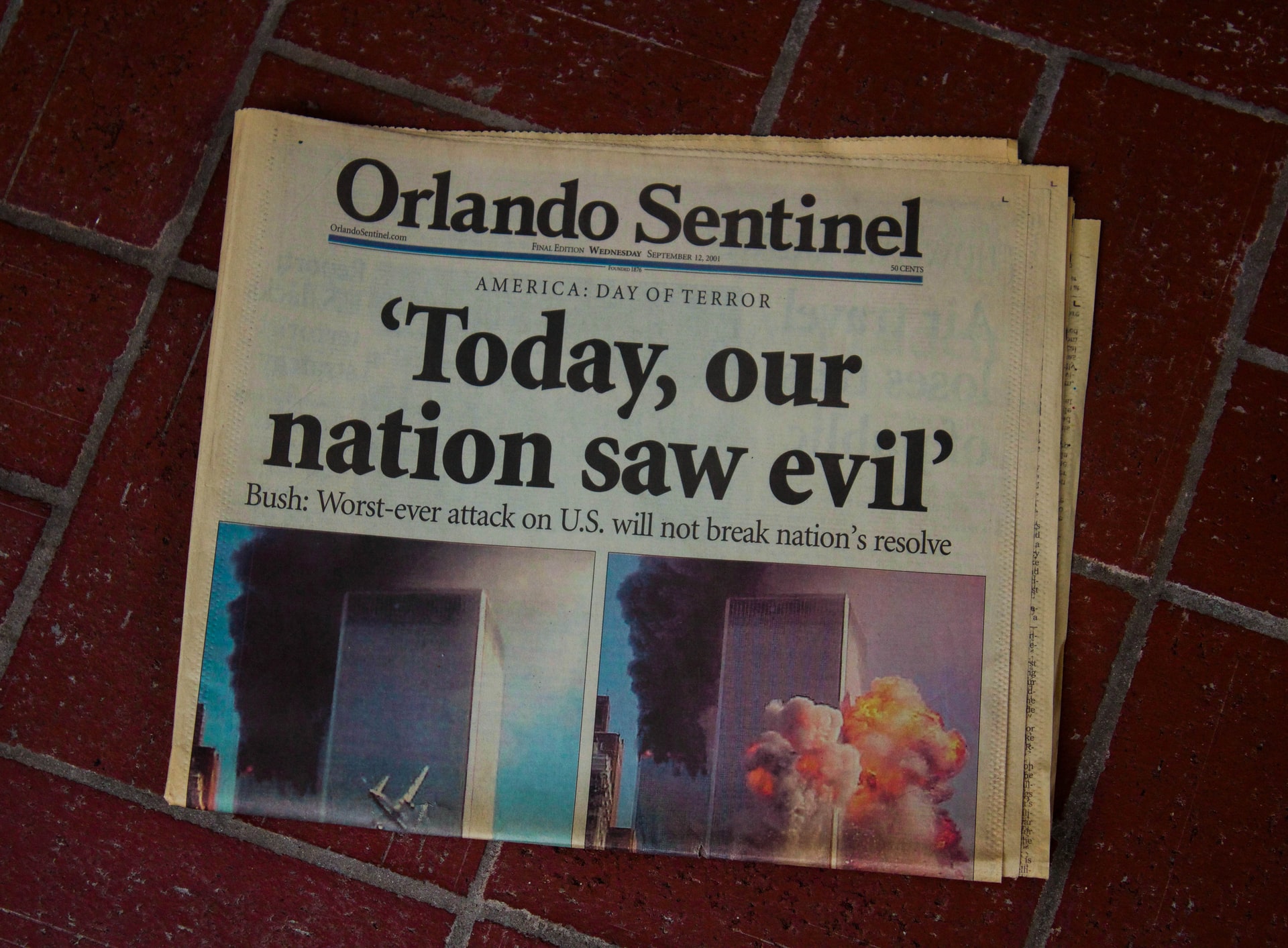 This is the 15th edition of Reel and Real, sent fortnightly on Saturday. That is about all things cinema, society that watches it, industry that creates it, and media that writes about it.

Two decades ago, on this day, global politics changed forever with the attacks on the World Trade Center in New York, USA. The 9/11 attacks transformed the meaning of the word, terrorism, for multiple generations to come. As the entire world watched a few planes cause untold destruction of life and property on live television, our engagement with the world changed overnight.

Suspicion and paranoia became the order of the day. Metal detectors and frisking became part of everyday life, regardless of whether we attended someone’s wedding or visited the mall. People started getting warier of who they met or what they uttered in public. Surveillance of phones and electronic communication became routine, with privacy concerns going for a toss.

9/11 was an event that changed all sorts of discourse, especially in America. Suddenly, post-2001, it didn’t matter whether you were red or blue, Republican or Democrat, or even White or African-American. Everyone identifying as an American citizen had only one thing on their mind: revenge. Over the last two decades, the US has devoted significant resources to two wars—in Afghanistan and Iraq—and multiple counter-terrorism efforts. The attacks, therefore, marked the start of America’s attempts at reinforcing its hegemony in global realpolitik—a strategy that has somehow reached its nadir with their recent hasty withdrawal from Afghanistan.

You must be wondering: Why am I suddenly talking about 9/11 in a newsletter about cinema? Hardly a few films have dealt with the attacks and the loss of innocent lives in Indian cinema. However, the storytelling tropes that were used in these films have gone on to define the “spy/terrorism thriller” genre in Indian cinema, sometimes without any nuance or detail.

Arguably the first film to touch upon the attacks—or just use the incident as a plot point—was Naseeruddin Shah’s 2006 directorial debut Yun Hota Toh Kya Hota. The film dealt with a cross-section of plots about various people trying to travel to the USA in search of a better life, but their lives get tragically intertwined with the 9/11 attacks. I still remember how, as part of the film’s promotions, the producers shot a lively music video that incongruously acquires a tragic overtone once you watch the climax of the film.

A few months after Yun Hota Toh Kya Hota, Yash Raj Films, the production house that had been known for its bubbly romantic comedies and dramas till then, pulled off a slow-burning surprise with Kabul Express. In Kabir Khan’s directorial debut, we saw five individuals, belonging to four different nationalities traverse the vast Afghan landscape in search of war reportage, mirroring the post-9/11 frenzy about televising the “war on terrorism”. Promoted as an adventure-drama, the film is anything but almost being gratuitous in its depiction of a war-torn Afghanistan.

Three of the protagonists are journalists, and yet, even now, you feel that in spite of borrowing heavily from international news reports about the country, the urgency of 24-hour live coverage is hardly captured here, as opposed to how Farhan Akhtar succeeding in canning the urgency of the 1999 Indo-Pakistan war in Lakshya. However, to date, Kabul Express remains the only Indian film about Afghanistan and shot in Afghanistan. In fact, it is worth watching again just to see the stupendous contrast between the sights depicted in the story and the real-life mess playing out in Afghanistan right now.

One aspect of the 9/11 film has been the remarkably casual ways in which torture of prisoners arrested on suspicions of terrorism is carried out in an unremarkable fashion—almost as if it were the norm. I think the first instance of this in a South Asian film was perhaps Shoaib Mansoor’s 2007 film Khuda Kay Liye. It’s not from India, but it is perhaps the only Pakistani film to have had a wide theatrical release in India. It’s also, to my mind, the first film to hint at the dangers of Islamophobia and the damage everyday misinterpretations of the Holy Book Quran can do.

I remember watching Khuda Kay Liye in a hall in Siliguri, and I distinctly remember how the usually-noisy matinee crowd went deathly quiet at seeing Mansoor (Shaan Shahid) being tortured in the dreaded detention camp at Guantanamo Bay. Watching footage of prisoners being tortured on live television was one thing, but to see the horrors of racial profiling and Islamophobia play out on 70mm was quite another. The other tragedy playing out in the film is the slow capitulation of Sarmad (a young Fawad Khan), Mansoor’s brother, to hardline Islamic ideals, thanks to the cunning Maulana Tahiri (Rasheed Naz). It was just uncomfortable to watch how Sarmad’s brainwashing ultimately leads him to commit an act of marital rape.

Two years after Khuda Kay Liye, Kabir Khan’s fascination with 9/11 continued with his next feature New York. Like Khuda Kay Liye, Khan showed how the South Asian community repeatedly became the target of hate and profiling in the US after the attacks, and how this further drove away many educated Muslims into the embrace of terrorist groups. The waterboarding sequence performed on Sameer (John Abraham) still gives me nightmares.

There have been other films that have dived into the impact of 9/11 as well, but not in much detail. For instance, Karan Johar made an admirable, if not perfect, attempt at highlighting the plight of the South Asian community in America in his 2010 film My Name is Khan. Abhishek Sharma also made the delightful Tere Bin Laden, which was released the same year, about a hapless Pakistani journalist going to ridiculous lengths to try and get to the US.

Multiculturalism is in danger today. People are easily mistrustful of others these days, and they don’t need to peg their misgivings to any particular ideology. Like Sarmad and Sameer, there are millions of misguided souls who feel religious amity and multiculturalism are dirty words, irrespective of which religion they belong to. But Multiculturalism is a concept that has been in the existence for thousands of years.

It’s a strange dichotomy these days that the rise of hate ideologies in popular culture, fuelled by social media, is jostling for space with globalization. And you sense this happening in our cinemas as well. If the scenes of torture and killings of innocent civilians disturbed us twenty, or even ten years ago, they don’t disturb anymore the way they used to be, the way they should. The “Islamic terrorism-actioner” has become a genre in itself, with so many films releasing on the same themes of brainwashing, terrorism and national security, that it has now become a stereotype itself which a lot of filmmakers easily resort to. Cinema is a reflection of the popular mood at any given point in time, so the continued proliferation of this genre signifies an unabated bloodlust in us for revenge.

At a time when the world is on the boil due to a global recession, a pandemic that refuses to die, and fake news, and a rapid redrawing of political hegemonies is happening before our eyes, we need to introspect about the dangers of living in a homogenized and paranoid world. And, perhaps, we should demand the same of our filmmakers as well.

If you plan to watch a 9/11 drama that looks at how American intelligence may have perpetuated 9/11 thanks to petty rivalries, check out the fascinating 2018 miniseries The Looming Tower on Amazon Prime Video.

This newsletter is first sent via mail in the morning hours; consider subscribing to it to receive right in your inbox, following this link, and be the part of our community of readers.