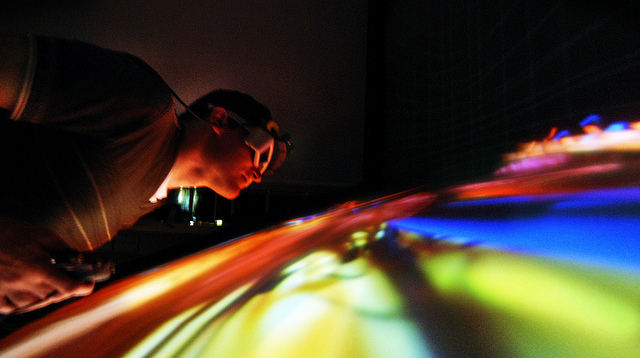 Oculus Rift: Welcome To The Future Of Virtual Reality

Technology has changed the way we entertain ourselves. 3D movie equipment and Virtual Digital Sound Systems are the new age amusements.

The advent of 3D viewing technology allowed us to virtually feel the events happening in front of us as if we are a part of it. They tend to make motion picture somewhat tangible (not literally). This gave birth to the craving of not just being a part of the events but also having a 360-degree view in relation to where we are looking and moving within our 2D spaces.

And as logical as it sounds, it is way more complex. The revolution needs to start with this technology being developed for an individual who will be physically using it. Then expanding it to a Group Level where various individuals interact with each other on a common interface, while having different angle and view-points.

Virtual Reality industry went into the frenzy to create such products. Oculus is one such tech-company to have created the VR system giving it an apt name “Rift”.

It was in development for quite some time and is officially launched all over the world on March 28. The process first started with giving out developer kits to gamers and innovators across the globe. On the basis of feedback, a cool gadget is now being launched.

The Oculus Rift sports an OLED Screen and has a built in VR Audio and Mic. It has front and back cameras for 360-degree capture all that is happening around the user. With a resolution of 2160 x 1200, it becomes spectacular for reality. It has multiple sensors like accelerometer, gyroscope and magnetometer. Gears available with the RIFT are Oculus Remote, Integrated VR-Audio, VR Sensors, Oculus Touch controller and Xbox games controller.

So what does this say about the VR industry? How do things churn up? Oculus will be seeing some heavy competition from the other fellow manufacturers. Many popular companies are in the final stages of launching their own VR systems. The only difference between Oculus and the other competitors is that the Rift gear has got an upper-hand on being well researched based on user experiences.

And as the Tech industry usually reacts, we will have competitors stealing ideas on the basis of these user experiences, where they keep the best features intact and exclude the unimportant ones. This chase to outdo the mighty, Oculus can actually have a great exposure to the audience. Innovation is driven by competition, who knows we might possibly be acquainted with technology that lets us use Virtual reality on a much bigger scale, in the future.

Going from a portable Rift gear, virtual reality can actually be scaled into a theatre kind of experience zone. While SpaceX is a thing of the mere future, Virtual reality could take us a step closer to the unreal by creating galaxies on the earth. We could have education zones for students who learn and interact with solar systems, understand difficult automotive in a nutshell using Virtual Reality.

Prototypes of major scale engines and complicated machines could be simply made to run in Virtual Reality and the probability of its success can be gauged easily. While all these ideas are simply a river to the future, we have just built a small boat. For now, the Oculus Rift takes all the attention and the world looks at its success in amaze.

World Happiness Index: India Slips Down, Ranked Much Lower Than...