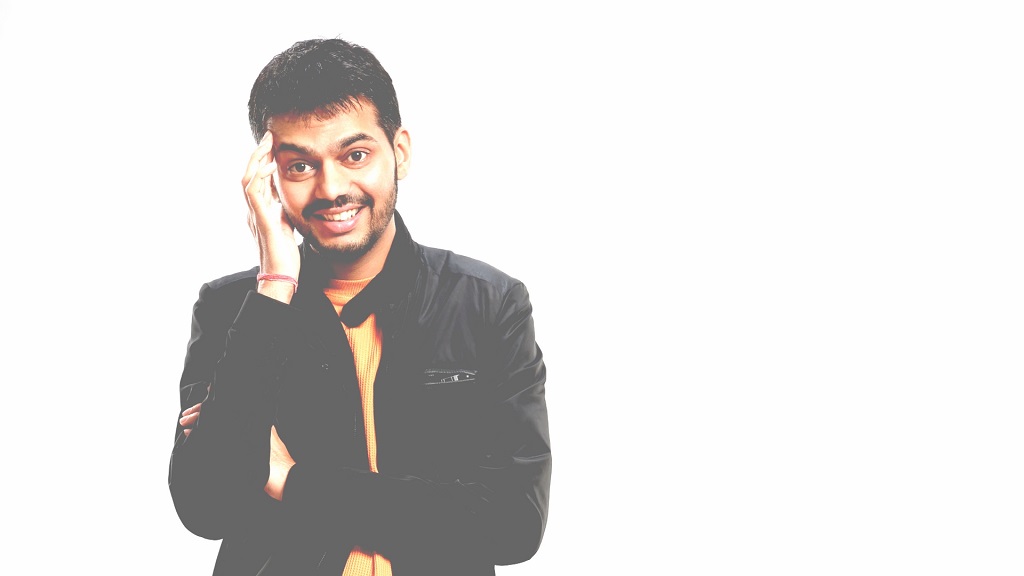 Yes, He’s Who Is Effortlessly Funny. And It’s Not A Funny Story. Take A Break!

A few months back, I stumbled upon a website where I read that a comedian, a very popular stand-up comedian was once a CA. I took a pause, and went on to check his Facebook page just to read its About section. Many of you will agree that who goes through the About section on a page, if you follow them, you check their posts, like and share them (can now react too), and that’s all. But this one thing has generated a different level of curiosity to know this man more because everyone has a story that we don’t always know! The website was of the East India Comedy, and the man was none other than Kunal Rao.

As Mumbai Mirror says he’s effortlessly funny, here I tell you it’s not a funny story. The time I had his image in my head, the time I read that he was once a CA, the time it kept on clicking that yes, he has something in box to tell, the time I never knew what’s coming back when I asked him questions, and the time (okay, one last time), when I looked back at his replies, the only words that came to my mind were brutal honest. An image and a perception that we always build suddenly went into vain through the impression from his other side.

You became a full time stand-up comedian in the year 2012. How’s been the journey till yet? What all have you gone through to make yourself count in this comedy circuit?

The journey has been interesting, that’s for sure! A lot of fun, excitement, adrenalin as well as pain, nervousness, and risk-taking. Since we were the first batch of comedians, one of the biggest accomplishments we had was that we were the trendsetters, which also came with the burden of making up the rules as we go along. I think that’s where most of our efforts went – just a whole lot of cluelessness and guessing of what to do next.

Obviously, this makes for a great story! I’m never short of one at a party, he added.

You’re single. I’ve gone through many of your tweets and Facebook posts, which define your status in a better way like the recent one, I’m single because I will only be with people who know the correct usage of whom.

What are your views on relationships? What do you think of this Tinder generation that how it takes up this “term”? By the way, I’ve used Tinder too, but it didn’t work out much in a better way as what I feel is early tech-adopters have ruined the propositions.

I think finding the right partner is as hard as finding the right job! However, I also believe the rom-coms have created an idealistic image of relationships. But I believe you should let people do what they want to do – whatever works for them. Either way, I think you’re asking the wrong person about relationships!

Well, this moment I knew, there’s a lot coming in and my journey of articulating a story on him has just begun in my head!

In a country of so many “WHYs”, what and who influenced to be a stand-up comic to dodge the why? What drives you to be more creative and funnier? What you generally do before start writing a script?

No one can dodge the Why!

(Well, a moment of silence flashed in my head and my prayers went out to my heart because it reckoned that have I asked the wrong question but as I always believe hope is a good thing, so here my prayers worked).

The why is what gives meaning to everything. Why did I become a stand-up comic? Well – I enjoy it. It’s more me than CA was. I’ve always been a reasonably good speaker and I enjoy the fact that I can use it.

Although, I think I’m a lazy writer. I should be creating more content, but I’m too fascinated by the world to find the funny in everything – there’s so much more out there! For instance, I’ve become more curious about drama – maybe I’ll explore it at some stage.

Most of my writing involves an observation I had jotted down a few weeks before that I expand on. That’s about it!

There’s this streamline developed having some irresistible flow, so keeping the flow while asking about an instance that he wants to share that had happened when he was about to quit the CA profession to be an artist, and today he puts the smug face for what he’s been doing today to ditch that instance. He said,

One correction! I did not quit my CA job to become a comedian. I quit my CA job and then became a comedian. When I quit, I had no idea what I wanted to do. In fact, I took my GMAT and considered an MBA. But I finally admitted to myself that I wanted to do something creative, and comedy happened to come along in the form of Vir Das, Sorabh Pant, and Weirdass Hamateur Night. Sorabh is pretty much the reason for my existence today!

I don’t think it’s wise to be smug about anything. Even as a CA, I had issues with my job, not the people I worked with. In fact, a lot of CA friends have been extremely encouraging and proud of what I’ve done.
Also, being a comedian is not better than being a CA. I know some fantastic CAs who are outstanding at what they do and love it to bits, and will probably change the world for the better in their own way! So really, smugness is out of the question.

My quitting process was very personal. It was sort of quarter-life crisis moment that had me reading Sophie’s World and asking questions like “What am I doing here and what is the meaning of Life”. I’m fortunate to have gone through it early in my life (though I also believe I have not seen the last of it!)

There’s this time, the term brutal honest struck my head. And I guess, the norms of my head have become repetitive. Kindly ignore, and I guess, the focus is in-depth to this man whom we knew full of witty humour and now, we know, full of honest lessons.

What are the bright and honest lessons you would like to share that your journey of life gave you?

I think Integrity in your word is one of the main things I try to live by. I think opportunities get created when you’re at peace with your Word. “I said something, so I’ll do it.” It’s hard! Very hard! But I try.

Also, many people are afraid of their past. I’ve found that whoever you are because of your past is a good thing. It makes you unique. These are clearly clichés, but as you can see, I’ve lived them! Which makes me the most clichéd comic in the world!

The term brutal honest strikes back. Can we all be just numb for a moment because I’m, no, I’m not saying this to you, I’ve said this to my head. My head strikes back too. Puns apart, what more you could’ve asked for. What more can be added here, I’m still looking for the words.

Is the country too sensitive to take humour as humour instead taking it as an offence? Where is that losing dot that we have become this sensitive? What change this generation needs, if nothing, least be aware?

Every country is sensitive. People keep forgetting that even western countries like the US and UK etc have their share of conservatives. There are enough comedians there who are reprimanded for what they talk about. Maybe the reaction is less extreme, but the feeling remains the same. Audiences grow with the comedian, and vice-versa.

First things first, such people actually inspire us to be progressive, no matter you make a choice or you don’t have a choice. We laugh on their sheer notes when they speak out, but that’s all has been noted from the observations they perceive. They let us be in the real world while they try harder to not let the smiles fade away. Now, that’s a task which he better knows!

East India Comedy has become a giant in the witty humour circuit. What do you think of the future with the online videos are catching up the attention as now, we have Netflix, and Amazon Video is too lined up while TVFplay is on the other side?

There are clearly no rules! Things are changing rapidly. I went for a 2 week vacation and found 3 new apps had launched and video making had a new technique! So we’re improvising as we go along.

Last but not the least, what’s the happiest and worst moment of your life? What’s the craziest thing you have ever done in life?

I’m not the kind of person who celebrates happy moments. I don’t even like birthdays. So I’ve definitely lost track of my happy moments. And I’ve had many bad moments too. I try to forget them.

But the craziest thing I’ve ever done in my life – quitting my CA job and becoming a comedian – was there ever a doubt?! (Also, doing comedy in front of parents! That’s very scary!)

Back to my head, I thought why, but then again, I gave a call to mind, I don’t want to be among the ones who keep asking why. So ‘why not smile’ was the next! The smile was on the face, the thread of life was in the smile. And when we are going to witness Kunal Rao having a show in Delhi is still in question.

By the way, his birthday is on its way, it’s on 3rd October. And his one of the personal interests is Pens. Maybe because chartered accountants sign a lot, and script-writers write a lot, and I hope my guesses aren’t wrong here. Cheers!