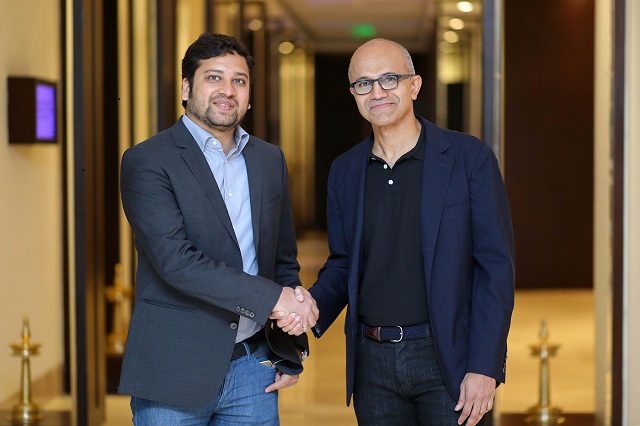 Flipkart And Microsoft Cloud Deal Comes At The Right Time

The future is the cloud. The divide between the on-device storage and cloud storage will be teared apart in the near future. Seems too futuristic, but with the entry of 5G into the market which is expected to be 40 times faster than 4G, we can see a drastic change in our experiences and the shift will be encouraged towards cloud.

The faster the internet would be, more people will find their space in the cloud services, Google is one fine example which has leveraged its cloud services, offering the storage of Photos on cloud with linking your Gmail account, quite simple and convenient in a time when in the near future, mobile will dominate, so will cloud.

As the size of addressable market starts growing, Amazon Web Services already dominates the Indian market having over 75,000 users using its cloud service, Microsoft Azure isn’t far apart, it comes close to it. According to Gartner, an American research firm, the public cloud services market in India is projected to grow 38% in 2017 to total $1.81 billion.

On Monday, Microsoft announced the strategic partnership with Flipkart, one of its kind for an Indian E-commerce store, for a start, Microsoft Azure will be on the Flipkart as its exclusive public cloud platform.

It is not confirmed but Microsoft may pick up a small stake in Flipkart as part of the partnership, although no deal to that effect has been signed yet, Mint reported. No doubt, the move clearly seems to point, tackling the Amazon, as AWS is one of the major USPs of the Amazon.

We are launching our strategic partnership together. I have always been an admirer of what Flipkart has done, in not only starting E-commerce but now in payments and logistics. It is really getting India on the map… I’m pleased to announce that Flipkart has chosen Microsoft Azure as its exclusive public cloud platform, said Nadella.

Of course this is just a start, because ultimately for us as well it is all about being able to support entrepreneurs of India to be able to create global scale businesses, and when we think about our mission that’s at the centre of it, Nadella added.

This partnership allows us to leverage our combined strength and knowledge of technology, e-commerce and markets to make online shopping more relevant and enriching for customers, Bansal said.

Flipkart in its tenth year of operations had taken E-commerce to about 50 million customers and the question now was how to take this to 500 million people in the next ten years, he said.

This strategic move will not only put Flipkart at front against Amazon but will also help it emerge in the consumer internet domain, clocking a share of revenues from Microsoft Cloud, when it was reported earlier Flipkart is looking to raise the fresh round of funds but has faced the valuation markdown by Morgan Stanley, one of its mutual fund investors, which led the Flipkart’s valuation to $5.4 bn as compared to $9 bn previously, and prior to this, in 2015, it was valued at $15.2 billion.

On the other side, Google also has its plans and reaching out to users offering the cloud services, in September last year, it announced its plans to set up a Google Cloud Region in the country which is expected to be live this year while Amazon opened its data centre in Mumbai last year.

Microsoft said Flipkart plans to leverage artificial intelligence, machine learning and analytics capabilities on Azure — such as the Cortana Intelligence Suite and Power BI — to optimise its data for innovative merchandising, advertising, marketing and customer service.

This strategic alliance with Microsoft (for cloud) is a great opportunity for Flipkart yet again to leverage the market share and branding proposition when millennials are already diving into the technology at a godspeed. At the event in Bengaluru, Mr Nadella also stated that the past 12 months saw around 2000 startups using the Microsoft Cloud.

If Your Man Is A Compulsive Cheater, He’s Really Not...

7 Ways To Grow Your Business Big