﻿ Ayush Garg When A Question On Climate Change By A Kid Made The US Politician Panic February 11, 2017 https://www.nakedtruth.in/wp-content/uploads/2017/02/When-A-Question-Salt.jpg 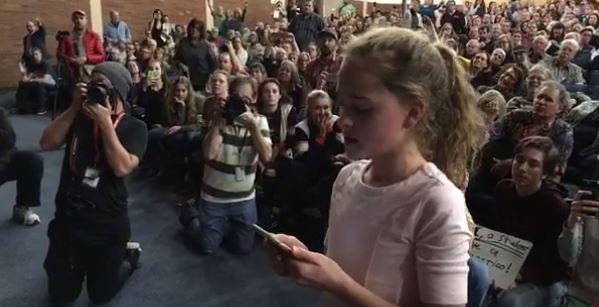 Politics has become funny, and it seems like politicians are marching ahead to make it funnier. Politics is no more Politics what we generally used to follow but it has become more of a prestige issue based on the heights of arrogance and for the sake of being called a leader.

On the other side, millennials are changing the dynamics and disrupting every field, take it tech or the culture, basically any. The culture of sitting back thinking ‘this is it’ is now nothing less than a myth. Every single day there is some sort of change in our way of experiencing things or thinking, as said change is the only constant, millennials are picking it up practically well, no doubt.

And kids are innocent and funny. They are well aware these days. They know the difference between the good and the bad, and the right and the wrong. They believe more in earning than getting, and a kid has managed to create a howl of bad reactions towards the US politician through her education. Many leaders, even today, have no idea about climate change which is sad, and this is happening which makes me sadder.

Trump is doing the rounds everywhere for the obvious reasons, and the Republican Jason Chaffetz has been questioned by the audience, as the crowd often didn’t like what all he had to say at a high-school auditorium having 1,000 seats filled and many didn’t get a chance to enter inside as there were no seats left.

According to the Salt Lake Tribune, the man addressed 13 questions in the given time and left the stage 75 minutes later being almost unheard. In short, it turned out to be a very bad interaction, again, for the obvious reasons.

The roars turned out louder when a ten-year-old girl managed to elicit some head-splitting reactions from the audience listening to the Republican mate.

What are you doing to help protect our water and air for our generations and my kids’ generations?

Do you believe in science, because I do?

Although Chaffetz shook her hand and encouraged her confidence of asking questions among the crowd, but the audience was all looking for his responses to it when he was being frequently questioned about his role putting up the issues coming from Donald Trump. And the conversation continued,

What is thrown in our air, what is thrown into our water, obviously has an effect on our environment. We have a major problem here, in particular Salt Lake Valley, with pollution, okay? We have to make sure that we’re being responsible. You have a different approach to how I do that than I do, OK? I support an ‘all of the above’ energy strategy and I do think coal is an important part of that.

How do you think electricity is generated? That is coal.

A man interrupted, to which he said,

I do support solar, I think it’s a great mix.

You gotta remember the Democrats wanted to build these huge solar farms, and it’s destroying the wild life, I think it’s a joke too.

The audience has completely expressed the disapproval over his remarks. It was obvious! The congressman should have been overwhelmed with the poor behaviour of the audience.

The whole scenario appears like a nightmare when a politician came to have an interaction has been left unheard, and from the start till the end, was shown a way of shout disapproval. The talk didn’t remain a talk!

For Now, Supermarket, Banks Have Humans But Will Not Have...

The Invisible Workload On Women Is Destroying Their Productivity