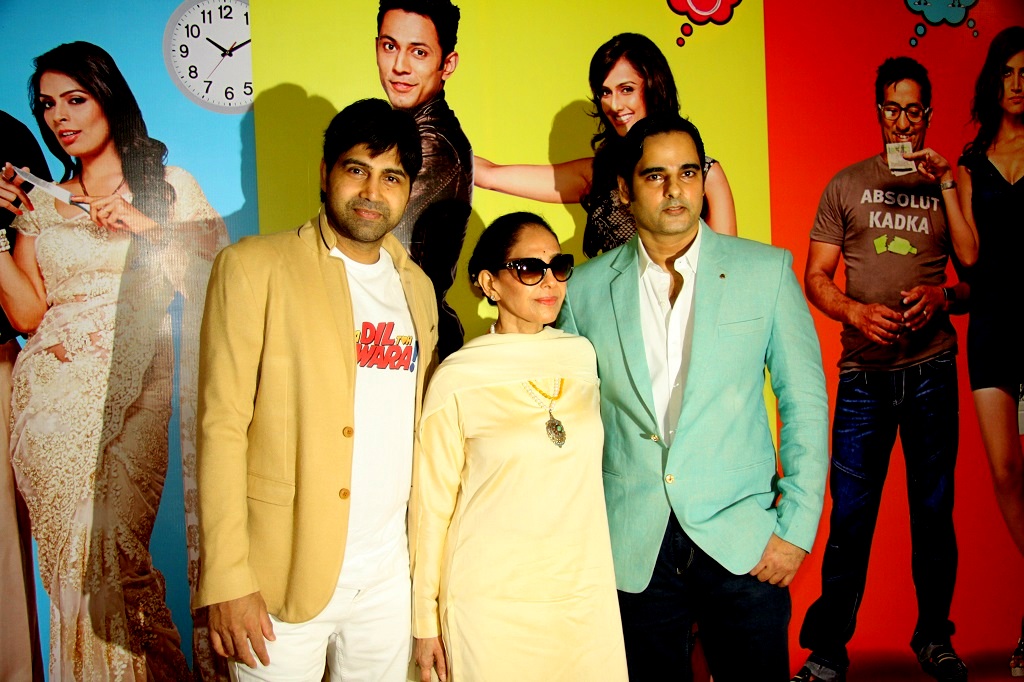 The song that has been heard since decades and yet relives a wave of romance in these so modern times, Hai Apna Dil Toh Awara has now have taken a turn to the new phase of living up to its title as a movie.

Monjoy Mukerji, son of Late Mr. Joy Mukerji, the star of the millennium known for many romantic movies like Love In Tokyo, Tumsa Nahi Dekha, Love In Shimla, Shagird, Naagin, etc, mesmerised every single being through his genre of the romantic movies stream, is now following the legacy of the star kid reviving the banner of his father bringing the charisma of romance with his directional debut movie, Hai Apna Dil Toh Awara slated to be released this Friday, 5th August 2016.

While speaking to Monjoy, even before putting forward the questions to him, he told me that I always wanted to come up that lives up to the theme of The Naked Truth of the society, not just by the name but quality. Quality that differentiates to relive the cinematic experience in the genre of Rom-Com and viewers who invest the money to watch the movie do not get disappointed after watching it.

The movie portrays the reality of the complex world of relationships between a man and a woman as Monjoy draws inspiration from the real life situations of his friends and acquaintances to understand how two lovers can commit themselves to each other for the rest of their lives.

The movie enlightens the love, its essence and above all, understanding and meaning of the relationship for the couple which struggle to find its depth in today’s scenario, he framed his thought. The emotions have become materials and so, the relationships turn out to be materialistic. The lost flavour of the mystique of being in a relation sharing the bond of love comes out from the movie that Monjoy has a depiction of it in his mind.

The poster of the movie.

Going back to the times where the love was more than an emotion and yet so simple. Shot in the remote areas of Kashmir valley where the man hasn’t gone or the areas which the mankind hasn’t explored yet touches the embarking motion of love with the soundtracks sung by the singers like Mohit Chauhan, Papon, etc, and keeping the hopes high, the director has a conviction to answer the audience that why one shouldn’t miss this movie.

Monjoy told that the movie has been shot at such locations where the sun rises for 4-5 hours maximum and had to take special permissions to shoot at the altitude of 13,000 ft near and at Kargil. Monjoy, sharing the memories says that this all had happened with the blessings of his late father whom once stardom followed and left so many impactful romantic movies and songs for the generations to not only live up to the romance but has a sensation to feel and connect to it.

A glimpse from the song shot in Kashmir!

Going into the state of memorabilia, Monjoy tells earlier the movie was slated to get the release in July but due to some censorship issues, it’s now been scheduled for 5th August and that brings a good luck charm to him as his father’s movie, Love in Bombay was released on 2nd August. Some connections aren’t meant to be expressed but they have a spot in our heart and we literally feel it.

The movie is U/A certified by the censor board and crosses one heart with its wholesome entertainment from a minor of 15 years to the senior citizens’ age group. Swag! The movie has various theatre artists starring Sahil Anand, Niyati Joshi, Vikram Kochhar from National School of Drama, Divya Chouksey, Nilesh Lalwani et al. It took almost 2 years of writing and making of this film touching the untouched Kashmir and chasing the sun in the area of ‘no terrain’ found.

Talking about the transformation of Bollywood in the today’s times, Monjoy suggests that a production house should not be turned into a factory of producing 12-15 films every year rather should focus on the quality script even if it produces one movie in a year. There is a need to cut down the quantity that we, every week, find that cineplexes are full of different movies but only a few rakes up to grab the box office collections.

On the issue of banning the movies or censoring them or cutting the scenes out of it, Monjoy suggests that don’t ban the movie, let the viewers decide what is right and what is actually wrong for them. If a movie draws a connection with the viewers, then a movie like Jungle Book taking us back to our childhood reminiscence has grossed a collection of million dollars. It’s all about the delivering of relative content in the righteous flow and drawing it as a value proposition.

While the conversation was about to be getting ended, Monjoy reiterates that put the focus on the content and quality, and convey the message of compassion and art, and see the gut-feeling breaks out in the conviction that the art has turned out to be value for money and every effort.

On a smiling note while asking about the Kashmir, he ends up saying that it’s a state of love and a very strong message about Kashmir is hidden in the movie, and dude, you need to see it for that, this 5th August.

And the call got disconnected and I started buffering the songs of the movie on YouTube.

(In the cover image, Monjoy Mukerji is at the right corner along with his mother Mrs. Neelam and brother Sujoy Mukerji).