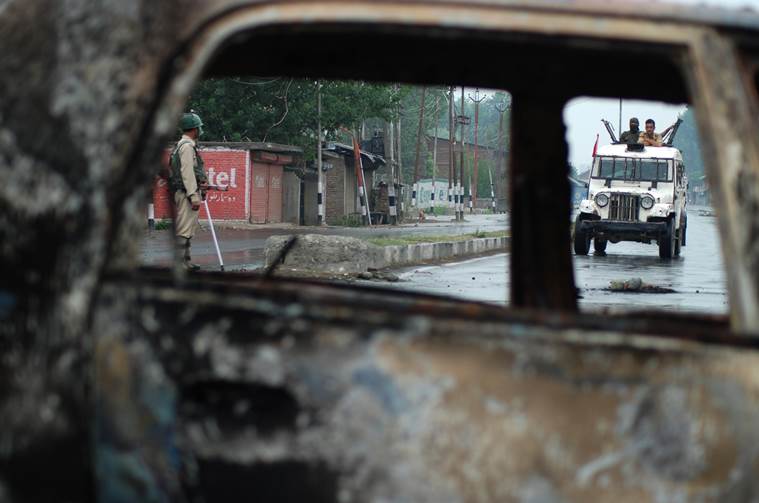 Another militant killed in the valley, Kashmir burned again and the people came outraged in large numbers, to bid their hero the last salutes and protest against the government. Here in Delhi, we sat in front of our television sets, condemning the act of terrorism and increasing intolerance across the nation sipping our chai and getting back to our usual work.

When will we wake up to understand that the state of Kashmir feels alienated from the nation as we exist?

They persistently remember the suffering in the valley. They bring forward pictures, accounts of encounters and massacres through vast public funerals and its memorabilia. For them the militants are martyrs and their graveyards are scattered across the valley and grieved over. It is a grim and deliberate remembering that doesn’t fizzle out the anger that they are carrying for ages.

What is evident with Burhan Wani’s killing and the turn of events post it, is the failure of our successive governments and that ruling at the state level to maintain the respect for human rights and fundamental freedoms. The naïve minds of youth and the strong intellect of liberals today have come to realize that until the rhetoric for justice turns into an action, this violence will never stop.

An act of terror is not tolerable in any pretext, a militant should not be celebrated as a hero! Wait a minute, and think over it.

What we have pronounced as terrorism is in their language a fight for rights, whom we called a militant is an unsung hero for them. There must be something wrong here, isn’t it?

Did you know for last twenty-five years Kashmir has been among the most militarized places in the world? The draconian AFSPA (Armed Forces Special Power Act) gives our military forces a legal cover to the assault of basic rights of a Kashmiri. It started an era of civilian massacres, disappearances, illegal detentions, alleged fake encounters and mass rapes. Their dignity is hurt again and again and maybe that is why their resentment erupts in the form of mass protests again and again. And maybe that is also why they celebrate people like Afzal Guru and Burhan Wani.

Can you imagine the atrocities and suppression Kashmiris are subjected to? There are popular stories of how Wani joined the armed militancy post the humiliation and torture he and his brother were subjected to by the Indian army. And maybe that is why a thousands of Kashmiris identified with him. Why isn’t the government trying to understand the Kashmiri sympathy for the slain rebel?

Every other person in the state seems to have a personal history of harassment or violence at the hands of police! Poverty, lack of education, religious mind washing, anger, and dissatisfaction has been pulling the youth to an extreme end. Terrorism in any form is never justifiable, but we will never find a solution if we suppress an enraged community.

It is the high time that we try to understand the situation from another side, and analyze whether it is the repression of the people and their rights standing as a root cause of this conflict, which often takes extreme violent forms.

Rather than debating on whether it was Pakistan sponsored or are they declaring the day for Wani’s death as a black day, we have to introspect and understand that we must support dialogue and peace. We must refrain from falling into the trap of supporting the atrocities of any kind. And also not let Pakistan play a political gimmick over it.

Our government must ask itself why does a Kashmiri youngster feel alienated in his own country? Why are we trying to crush their voices and refusing to hear what is behind their anger? We must listen to them, their agonies and suffering. We must not shout to win over them yet again.

The Prophecies And Realities Of Climate Change