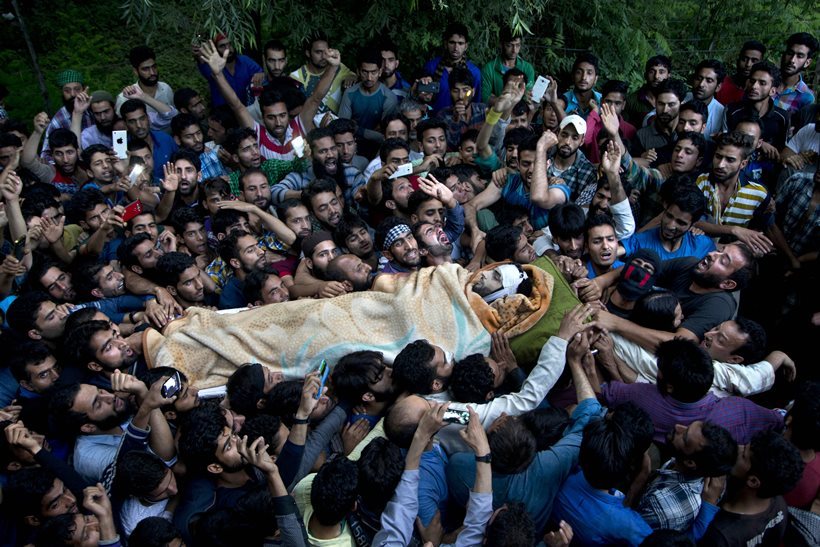 It has become a place of the times of Jihadists, Separatists, Extremists, Militants etc., who feel that the responsibility of a free and flourishing Kashmir lies solely in their hands leaving no stone unturned to fulfill their fair share of duties.

But why should the credit be all bundled onto their heads when our own people (who somehow feel alienated in their own country), different political parties and the media too play a pivotal role in polishing such views?

Burhan Wani!
Did the name ring a bell? One of the many names that encounters a mindset!

Burhan Wani, the most talked about, preached, idolised, romanticised and even ‘martyred’ personality in the buzz since his death even labelled as a young leader, and separatists call him ‘freedom fighter’. Even the person himself wouldn’t have thought that his death would create such a high-end buzz all over the country.

And how did it all start in the first place?

An attempt by the Indian forces to protect and guard their people from the clutches of terrorism lurking right amidst them in the face of the 22-year-old Hizbul Mujahideen commander who was nothing more than a hiding leech growing on the lost young minds of Kashmir.

All we’ve been hearing about since the day of his death is the news of widespread terror, killings of even more innocent lives and the forgotten ideals of peace and prosperity. From throwing a car having a policeman inside it to drown, to setting ablaze the police chowkis having people inside it to die a dreadful death, all in the name of avenging the death of a so called leader to them.

The fact that disappoints utmost is that why all this violence when the only agenda in everybody’s mind is peace. Just like goodness begets goodness, terrorism begets nothing but terrorism; a fact that is far from the understanding of the misguided grieving minds of the ‘Burhanic’ Kashmiris.

The reason being all and nothing but the deep blame and state games played by the neighbouring countries to get at each other, providing fructuous grounds for the blooming revolting minds on the grounds of once serene Kashmir.

An even more apologetic concern is the favouritism towards this open demonstration of support riding on violence, exclusively on the grounds of religion and rationality. How could human rights violation be a reason for lads like Burhan Wani to become terrorists? Rather the cards of sympathy and victimisation have been played at the forefront. In their ordeal to requite what is lost, they are torching even more hatred and gloom. And there’s absolutely no end to this repeated curse.

But the sorry state is not one to end just here. This is just the beginning. With the media doing nothing but debating over the situation with absolutely no solution, or for that matter a simple result; the government actions going under vain rather becoming incapable of handling the situation and the country getting in a phase to gauge what is actually happening, a full stop is far from sight on this apologetic condition of Kashmir.

To top it all, the very separatist minds who claim to fight for ‘azaadi’ and leave no chance to corrupt the minds of the young Kashmiris don’t feed their own children and family members with the same filth, instead prefer transporting them to ‘safer’ destinations. If we can point a bump there, why can’t the so agitated supporters in Kashmir?

At one point, we talk about combating terrorism and how it has shrunken the prospect of humanity, whereas on the other hand, we openly support and praise a local terror agent in the name of religion and region. This unbalanced approach does nothing but weighs down under the influence of separatists and disrupts the political, economic as well as humanitarian balance.

And now, the reports flashed that Pakistan Prime Minister Nawaz Sharif officially declared Burhan Wani as a “martyr” and said July 19 will be observed as a “black day” to express solidarity with people of Kashmir terming the “movement of Kashmiris as a movement of freedom”.

The debate is not on ‘whom’ or ‘where’ it all boomed but ‘why’ it boomed and ‘how’ it can be curbed because at the end of the day, it is the precious lives of humans that we are losing and how many more will be put at stake if a similar perspective prevailed.

Just the mere fact that people are talking about it won’t itself change what is happening around!