﻿ Vivek Kapadia Will India Make It To NSG Under China’s Influence? June 25, 2016 https://www.nakedtruth.in/wp-content/uploads/2016/06/NSG-Meet-Edit.jpg 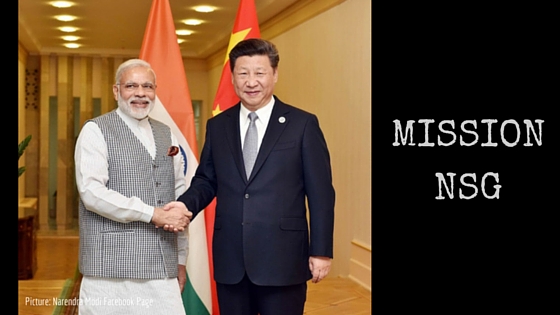 India’s entry into Nuclear Suppliers Group (NSG) has been the single focus for Modi government when it comes to foreign policy. All eyes were on the NSG meeting that took place in Seoul on June 24, yesterday, where it was believed that India’s entry into NSG is to be brought up and if everything goes well according to the plan, India will be the 49th member of the elite nuclear group.

The US today said that there is “a path forward” for India to become a full member of the Nuclear Suppliers Group by the end of the year, hours after the group’s plenary meeting ended in Seoul with no decision on India’s membership in face of strong China-led opposition despite a significant majority backing the Indian case.

As it is quoted that everything does not come served to you on the golden platter. India’s entry in the elite group has been hampered by China’s reservation that India has not signed the Nuclear Proliferation Treaty (NPT) which is a necessity for the entry. Even when China itself is not an NPT signatory yet is a member but acceded to the treaty in 1992 along with France!

It is true that NSG was started in the wake of India’s nuclear tests in 1974 and it is also true that it has not signed the NPT but India got a waiver in 2008 to trade in nuclear energy and exempted from the current guidelines.

NSG is not a treaty but a group of nuclear supplier countries that seek to prevent non-proliferation of nuclear weapons through implementation by controlling nuclear exports and nuclear-related exports that can be used to make nuclear weapons.

It has been more than 25 years since NSG was formed and some of its guidelines were revised in 2001 at Aspen to admit new members to the nuclear group. And one of the revision was the membership of NPT. The guideline suggested that membership was not a mandatory requirement while deciding on a country’s application.

So, China’s reservation that India does not hold NPT membership does not hold much water, rather puts Beijing government in a bad light even when their negligence towards India has been continuously justified time and again. The backbiting by Pakistan when it comes with no stand for its own but if India enters to the club then Pakistan should also regardless of what facts suggest is another futile claim.

India with its 2008 waiver has entered into quite a few civilian nuclear agreements with a lot of countries and is keen to become a member of NSG, so that it can expand its nuclear power generation and also export nuclear energy in the coming years. Not being a member of NSG, India’s track record with the 2008 waiver has been incredible. The same cannot be said for the nation China.

Pakistan too in 2016 has applied for the NSG entry and the Beijing government has been putting its weight behind their credibility. But the country has a past where its head scientist nuclear weapons program ran an illegitimate network for years that sold nuclear secrets to countries like North Korea, Libya, and Iran. If NSG was able to grant a waiver to India in 2008 on the basis of its past performance, it should have no objection to admitting it as a member this time.

Decisions at NSG are taken by consensus, so any country – big or small – can stand in the way of India’s entry into NSG, but India will keep pushing for it with or without China’s support.