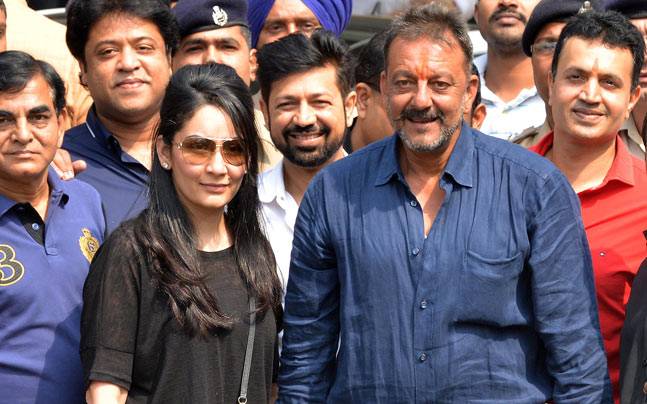 “Sanjay Dutt Is Not A Hero For Us, Munna Bhai Is”

Sanjay Dutt is now a free man, having served a sentence of forty-two months, the 56-year-old actor had at the time of his arrest served 18 months in jail earlier, as part of a five year term after conviction in the 1993 Mumbai serial bomb blasts case, he walked back home today.

What some rue is that he has been out on parole for almost five months in the last two years itself. However, the life for him in jail was no bed of roses, or so it seems. He is, at one point in time said to have lost eighteen kilograms in weight. Nonetheless, his jail term is an example of how VIPs are treated in the prison.

There is talk about him getting food from restaurants, regularly. Also, he has been allowed to smoke and drink, at times. What comes to light is that this buck, of good treatment doled out to “a select set of prisoners,” does not just stop at him.

There are similar case studies galore. Amar Singh, the defamed political bigwig, lodged in Tihar Jail in New Delhi, is another example. Right from bullying jail officials and raving and ranting at them for small issues, he was even given two cell mates who scrubbed his floors and kept the cell clean at all times. The room he was lodged in was wiped four to five times a day with disinfectant and insecticide sprayed at large. Home cooked food was a facility given to him and he could order from the canteen as well. As per jail rules, only two visitors were allowed to meet the prisoner in a week, whereas in his case, he had guests literally each day.

Jagir Kaur, the former minister of Punjab, who was lodged in Kapurthala Jail even had jail authorities coming and touching her feet on her arrival there. Manu Sharma, convicted for murdering Jessica Lal, partied like there was no tomorrow while he was on parole, reportedly.

Lalu Prasad Yadav, in Birsa Munda Central Jail in Bihar, was given an upper division cell with a television set and all of two cooks, all for personal use. Convicted in the fodder scam, he even got all the reading material he asked for. Also, VIP prisoners, as per reports, are allowed to roam around in the prison for an extra hour in the evenings.

This story does not just end here in our own country. Even in neighbouring Pakistan, there are reports about how Ayyan Ali, supermodel, who was caught “smuggling” $500,000 at Islamabad Airport and punished for it, is said to have led a rather comfy existence in the cell.

Right from being lodged in a well-furnished room with a refrigerator, she was even allowed the use of a cell phone called the V-set. This is a model which is the only kind of phone that is supposed to work inside prisons in Pakistan. Made to order burgers, mineral water, and fresh juices were supplied to her rather much too often.

Summing up, it just stands so true that even in the space where all convicted are put to test behind bars, there exists abundant bribery, cheating and corruption and an unequivocal stance for differing segments of our society.

Sanjay Dutt could be a hero for many but can never be a role model. Such “heroism” have an existence in reel life, not in the real life!

The Counterview To The Popular Belief On Being An Anti-National