﻿ Vani Verma The Counterview To The Popular Belief On Being An Anti-National February 23, 2016 https://www.nakedtruth.in/wp-content/uploads/2016/02/Antinational-JNU1.jpg 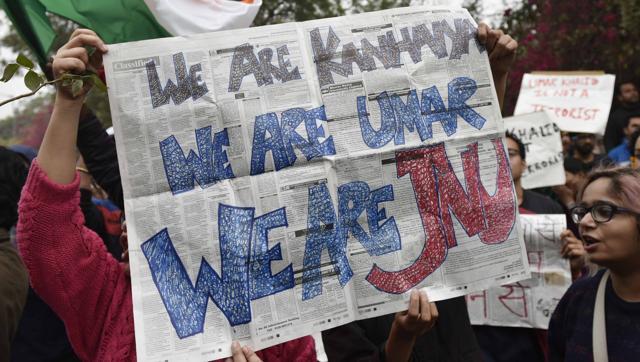 The Counterview To The Popular Belief On Being An Anti-National

Before I start to present my ideas on the raging nationalist debate in the country, let me just make it clear that I am not a political person. I am a naïve young Indian who trusts the common sense and logical reasoning over my blind love and faith in “Bharat Mata”.

We have witnessed a series of controversial events in the last few months, here I want to specifically discuss the JNU row, what was the fuss about and ask some fundamental questions which we might have missed while being swayed in the direction most of us were swayed to.

I would really want to know that bashing a person whose views do not match with ours is a justifiable act?

Just think about it, we are a rational lot of population in this country, why can’t we accept a simple fact: Like there is an absolute truth, there is also a relative truth, that which is set in our beliefs and understanding of our surroundings. This, I hope can justify that we all have our own set of truths and stories to share. All we need to do is switch sides and try to understand the other version. Please do note that it will call for an unbiased ear and a respect for an alternative view.

Why do we so sternly believe that only what we think right is right? Why imposing our ideas and notions so fashionable today? I believe it is high time that we realize that we can rightfully have our own set of rules defining our right & wrongs, but we can still peacefully co-exist with those who have a different set of beliefs.

What happened with Kanhaiya Kumar in the Patiala Court Room is condemnable to my mind, but the lawyers who did that feel no shame and are rather proud of what they did. Please don’t ignore the quiet policemen who very conveniently encouraged the attack. Before jumping to any conclusion please see the uncut version of the speech he had given at JNU.

I could not find anything Anti-national to it, but only a suppressed voice finally rising to ask some hard questions. I could empathize with him and request you to try to listen to it from the perspective of a humble human being whose people have been denied the basics in life and he had to fight his way through to access this education.

I would also like to pose another question, shouldn’t a person be allowed to bring forward his stand and explain it? When Kanhaiya Kumar did it, he was detained and we all know what he had to face in the judicial custody.

Another name that emerged was that of Umar Khalid. He is alleged to have been shouting anti-India slogans, basis videos which are highly likely to be doctored. The authenticity of the viral videos is still under examination.

And even if they are not and he has indeed been a part of a group shouting out anti-India slogans, have we waited enough for the police and the court to investigate which people were those and why they did it? Have we really allowed them to speak out?

The entire JNU community was tagged “Jihadi”, isn’t that lame, when we Indians like to delve into the details and not jump to conclusions just like that?

A few days back I saw this debate on the National News Channel, Times Now, where the respected moderator calls the alleged students to his show, accuses them to be terrorists, anti-India and twisted minds, without letting them respond to the accusation made at them.

Mr. Respected Moderator not only pronounces his judgment in a very vocal show, but also allows a BJP Leader Nupur Sharma to call them names and shout at them. Isn’t this kind of journalism dangerous to a democracy? Isn’t the media trial as naïve as we are? Isn’t it high time to realize that when Aamir Khan did it and the entire nation was after his life to apologize to have chosen wrong words, why didn’t we let the Mr. Respected Moderator know that playing with the audience’s psyche and infuriating the people with such strong words is not only irresponsible and unethical but also blasphemous?

Umar Khalid and other accused students, along with Kanhaiya Kumar have now moved to High Court with the plea against the Assault by Lawyers in the Court room. How could you even expect a boy to come out and surrender when he had clearly seen how his counterpart was handled behind the walls of the respected court of our country?

Afzal Guru hanging has had many voices raising throughout the country. He was guilty of being a terrorist and hanged. But many activists have raised their voice against his framing as a terrorist, questioned the trail and still continue to do so. Some students of JNU were doing the same. Instead of shooing their voices, don’t you think inviting them for a fair and meaningful debate and presenting the proofs a better way of fighting the matter?

Sensitizing the mob is a greater challenge than mobilizing them in the name of religion or country. A very respected journalist Ravish Kumar recently raised the same question and tried to bring out the matter very clearly to his audience, and I guess he was able to put it across well.

Why are we bringing the fight of principles or national issues or even political ideas down to the little and insignificant battles of TRP and sensationalism? Many channels like Aajtak, Zee news and ABP news, to name a few, created a dramatized version of the entire JNU row. Shouldn’t they dutifully only present the facts and the events as they were and not make rhetoric claims of who a terrorist is?

As I have admitted earlier, a naïve young mind, who only can process the information in front of him can see that there is something wrong with the way we are handling it all, why can’t the intelligentsia of the media see it? When a basic logical mind can see that the society is being polarized in the name of religion and subtly the seeds of hatred against the people who do not agree with our point of view are being sowed in our minds, why can’t the masses understand it? Why do we so easily write off scholars in the prestigious institutes just because they dissent rather than inviting them to say what they have to say and we counter question them? Why do we encourage callous journalists to chart new stories which have a lot of twists and turns and fail to realize that there may be some political influence behind it?

If you ask me, a simple solution would be the acceptance of an alternative thinking. Let us encourage discussions and debates over shouting and allegations. We have a huge sphere of co-existence and let us not forget that a progressive society has to be dynamic.

I would like to conclude here by what I read in a recent Twinkle Khanna post where she quoted a freedom fighter, “Civilization is the encouragement of differences.”

Let us become a matured society who chooses a conversation, an exchange of ideas over the mere imposition of beliefs.

PS: Do ask the above mentioned fundamental questions and look for non-reactive answers. Let us choose our battles wisely.

Overhaul In The RBI: “My Name Is Raghuram Rajan And...

“Sanjay Dutt Is Not A Hero For Us, Munna Bhai...