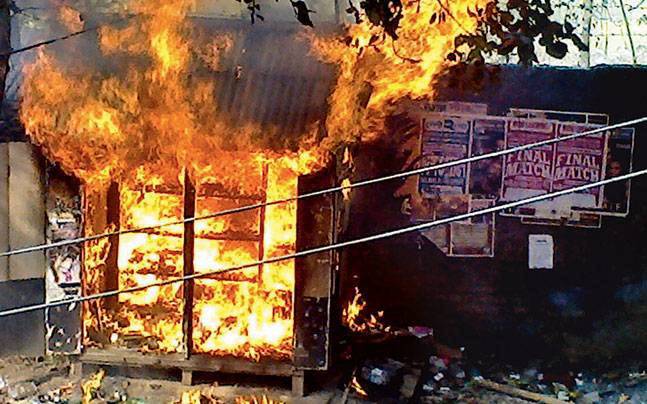 The debate on intolerance is still afresh in India, when yet another incident has fueled the existing fire.

Few weeks before, Kamlesh Tiwari (Member of the Akhil Bharatiya Hindu Mahasabha) made a statement, calling the Prophet Muhammad, the first homosexual in the world.

This statement was in response to the one made by the UP cabinet minister, Azam Khan, where he branded all RSS members as homosexuals.

Feeling the sting of insult, the angered Muslim community gathered together and organized a protest rally on the 3rd of January 2016. The Anjuman Ahle Sunnatul Jamaat (AJS), a Muslim organization responsible for organizing the rally had taken prior permission from the concerned authorities in Kaliachak and also demanded the hanging of Kamlesh Tiwari. Provocative flyers and leaflets were distributed and over a lakh Muslims attended the event.

According to the reports, the rally turned violent when, while marching, the protesters reached National Highway (NH) – 34 and came across a North Bengal State Transport Corporation (NBSTC) bus that was trying to pass through.

After a heated discussion between the protesters and the driver, the bus was lit on fire. What followed was the vandalizing of several private and government vehicles, the Kaliachak Police Station, block development office and public property. The protesters, raising the bar of their protests, jammed the railway station and the trains thereby causing a disturbance in the train service. Riots broke out when the police intervened and tried to stop the protesters.

Before more is discussed about Malda, it is very important to understand the demographical and geographical situation of this district. Firstly, Kaliachak is one of those areas where the Muslim population equals that of Hindu and shares the majority of the available land. Secondly, Malda shares borders with Bangladesh in the East. It is a district where the Ganga River splits into two.

Padma, the main stream, enters into Bangladesh through this region. Due to the location of this area, it is prone to intrusion and undetected activities. Thirdly, Kaliachak is a place where poppy cultivation is a major source of income and the seeds of this plant are also used to prepare opium, a banned drug.

It is rumored that the Mafias, taking advantage of it being a border area, produce and smuggle these drugs to Bangladesh and also run a fake currency racket.

This leads to suspicion and adds another angle to the whole incident. According to the reports, a major political gameplay is suspected in these riots.

A senior BJP leader, Siddharth Nath Singh, claims that the main purpose behind the lighting up of Kaliachak police station was to burn the records related to the fake currency racket. Taking advantage of a religious outrage, local goons who had criminal cases registered against them, attacked the police station to destroy the evidence against them.

He also accused the TMC, led by Mamta Banerjee, of playing the vote bank politics and not taking any action against the illegal activities that have been taking place in the district. Also, the state government paid no heed to the situation, even though there were more than lakh protesters.

Moreover, BJP MPs were denied permission to visit the affected area and very limited media coverage is being allowed to cover the incident, raising more arguments and suspicion.

This conspiracy brings many questions to the light that why media turned silent over the turmoil? Why was there a limited coverage by Media? Why political leaders turned silent over it? Why was it posed as it’s not a big issue but when the videos came out, it reflected the hidden truth? It was labeled as an incident which made us view the hypocrisy running across the nation in the other view.

It was then the dignities turned silent over the rising intolerance. It was then few questioned the fanatics that where is that campaign of returning awards now? It was then when one more severe incident breathing less under the reports of hypocrisy which runs inside the biased head. It’s to the shame that riots also come under conditions. The lives and deaths also have their political agenda. It was then trended on the social media as #MaldaHypocrisy.

As of now, section 144 is imposed in the area; additional security forces have been deployed to control and prevent any further escalations. Only 10 out of the total 130 accused have been arrested, out of which three have remained in the police custody and the remaining have been sent to 14 days in judicial custody. Moreover, Kamlesh Tiwari has been arrested and put behind bars on charges of hate speech.

Even though the situation is under control but there are still a lot of questions that need to be answered before the case is finally considered closed.

[Watch & Read]: The Undercover Investigation Will Make You Think...