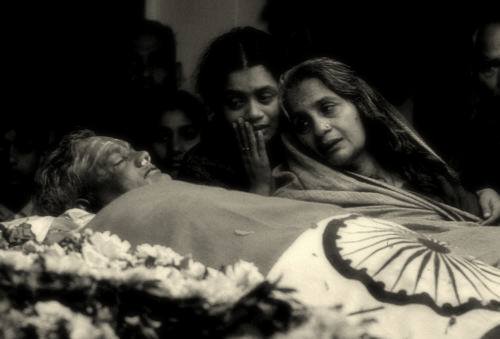 January 1966, Tashkent – “On the huge bed, his body looked like a dot on a drawing board. His slippers were neatly placed on the carpeted floor. He had not used them. In a corner of the room, however, on a dressing table, there was an overturned thermos flask. It appeared that Shastri had struggled to open it. There was no buzzer in his room, the point on which the government lied when attacked in Parliament on its failure to save Shastri’s life.”
– Kuldip Nayar

Lal Bahadur Shastri, the second Prime Minister of India had breathed his last on a foreign land in a series of unforeseen events. Hours ago, he had signed the historic Tashkent Pact with Pakistan, in the presence of Soviet Union’s premier Alexei Kosygin.

The nation was shocked at the unanticipated death of a Prime Minister who had been sworn into power barely two years ago. Shastri had humble beginnings. Born in Varanasi to a family of limited means, he had donned the roles of a Freedom Fighter, State Minister, Cabinet Minister, Home Minister before finally becoming the Prime Minister.

His journey of becoming the Prime Minister had been an arduous one. Initially, an ardent follower of Jawaharlal Nehru, he was later shunned by Nehru and his family. Regardless, he was sworn in as Prime Minister in 1964 following the unexpected death of Nehru.

Shastri’s diligence and devotion to his job were indubitable. His humility and austerity had earned him the moniker of “the penniless Prime Minister.”

Like Janardhan Thakur puts it in his book Prime Ministers, “the little sparrow had no enemies. He was simply incapable of making one, either in politics or in personal life. He had the patience of a Job; he could tire out people bent upon fighting.”

The possibility of a person of such disposition being murdered is quite disconcerting.

The year 1965 turned out to be eventful for Shastri. For someone who had been construed as an ordinary and meek person who “could be mistaken for a minor clerk”, he proved his mettle by taking tough and effective decisions.

The National Development Dairy Board had been established at Anand, Gujarat which was an imperative step for the White Revolution. 1965 was also the year in which Shastri led the country during the war between India and Pakistan which somehow led him the location of his death.

The 22-day war which was a result of cross-border skirmishes by Pakistan ended with an intervention from USSR in the form a peace agreement which was signed at Tashkent on 10th January 1966. Although the war ended in a stalemate, Indian sources believed that had the war continued, India would have been on the winning side.

Shastri’s unexpected demise raised a number of questions. While the governmental sources maintained their stance of a cardiac arrest as the reason for the Prime Minister’s decease, Lalita Shastri, his wife refused to make peace with that.

According to the Prime Minister’s family, when his body arrived in Delhi, it had turned blue and had cuts. A lot of events that had transpired in Tashkent before his death lay the ground for further speculation. Shastri’s place of stay had been changed just twenty-four hours prior to his arrival.

His dacha was quite far from where the rest of his party was put up. The dacha was devoid of medical arrangements and there was no telephone in the Prime Minister’s bedroom. He had returned to his dacha at 10 pm post attending Premier Kosygin’s farewell reception. His dinner had been prepared by Ambassador T.N Kaul’s cook Jan Mohammad and not Ram Nath, his personal servant.

At around 1.20 am Shastri came out of his room coughing and asking for “doctor sahib,” Dr. R.N Chugh. His assistants helped him to bed. However, before, Dr. Chugh could act; the Prime Minister had breathed his last.

No help could be sought from outside. It was a while before others realized that something was amiss.

The government’s negligence in handling the former Prime Minister’s death has been voiced and lambasted time and again by Shastri’s family, who has asked the files related to his death to be declassified.

Despite evidence of possible foul play, no post mortem had been conducted in Tashkent or Delhi.

The media was given little information. The Prime Minister’s personal diary was never recovered. While conjectures and theories are plenty, the real reason behind Shastriji’s death has been locked down in a bunch of files far from our reach.

Was there foreign involvement or was it an indigenous conspiracy? A lot of questions remain unanswered till date.

On the morning of January 11, his secretaries found a note on his table, in which he had penned down lines by Urdu poet Saqib Lakhnavi.

Did Lal Bahadur Shastri have a premonition of his own death? Or did he just write these lines on a whim? Perhaps, we’ll never know.