﻿ Ravleen Bali We Are No Evils Because We Menstruate. We Are Happy To Bleed! November 27, 2015 https://www.nakedtruth.in/wp-content/uploads/2015/11/Happy-To-Bleed.jpg 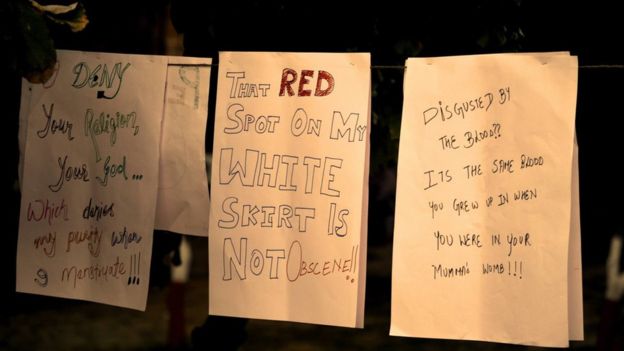 We Are No Evils Because We Menstruate. We Are Happy To Bleed!

Travancore Devaswom Board President, Prayar Gopalakrishnan, has raised up a controversy by saying that women will be allowed to enter the famous Sabarimala Temple only when ‘a machine is invented to scan if it is the right time for a woman to enter the temple.’

Prayar Gopalakrishnan, who has been recently appointed as the Devaswom Board President said,

“Now there are machines which can scan bodies and check for weapons. There will be a day when the machine is invented to scan if it is the right time for a woman to enter the temple. When that machine is invented, we will talk about letting women inside.”

The famous hill shrine in Kerala which sees crores of devotees from across the country in the pilgrimage season doesn’t allow the entry of women in the menstrual age group.

Sabarimala temple authorities had earlier this month said that women can be allowed in the temple once the machine that scans menstruating women ‘just like the ones that check for weapons’ is invented.

This has led to a huge outrage with one campaign by name ‘Happy To Bleed’ being launched asking women to “to hold placards/sanitary napkins/charts saying Happy To Bleed” and post the pictures on their profiles or the campaign page “to oppose the shame game played by patriarchal society since ages”.

We can now easily say that from the temples, activists have now come up with a counter theory. A “pedestal” theory – if you know what I am talking about.

They claimed of purity of the menstrual blood, they talk about the strength and vigour of a menstruating woman that is, supposedly, so fierce that even the God (if there is one, or many, or so!) fears her and keeps her away. They talked about sheer superiority and larger than lives of womanhood. They proposed deification and supernaturals, sounding serious and scientific, and more, pleasing! They talked about women not being mere humans, because… well, because they menstruate!

Now, that’s plain dangerous! That’s – trust me – is no less dangerous than what – the taboos – that it is supposed to counter in the first place. And, as we mindlessly go about hitting the likes and the shares – do we not? Absolutely, need to stop and think of the many what’s and how’s?

Consider this, fellow divine woman! Do you feel braver, stronger, kinder during *those days of the month* any more than what you, by your nature, are? Do you feel more benevolent, more charitable, more selfless, any more than what you are, because it is *that time*? Does menstruation bring about in you any extra virtue, some additional conscience, some excess brain, a superior heart than your very own originals? Do you need this theory, really? And, are you good to trade this theory with what you want but never had, with what you want to claim? Would you want to believe it just because it *sounds* good, unaware that it is but a different means to reach the very same end?

Remember (Oh, please do!) – Social taboos on menstruation cannot be defended with the eyewash of respect. Pedestals have never helped us in any way other than promoting discriminations and disparities. Negative or positive, a larger than life interpretation of menstruation does not help women in any way.

We should, we must know what we fight for. We must understand what we need to fight for. We need to fight against the evils. While we must absolutely stop the practices under which girls are given to sleep on floors and wipe with rags, and not enter the kitchen or not let to wash their hair or stopped from going to schools, we should not, never, also be fooled into a myth that they should not do all these same things because they are “divine” and superhumanly.

Pedestals are only an alternative, smarter, suave form of discrimination, an excuse for unfairness, a tool for the disparity. In our struggle for human rights, we should not give up the very same human rights in the name of deification, in the eyewash of pedestals.

We do not, do not, accept belonging either at the feet or above the head. We just want our ground, a ground below our feet, just beside the other kind, the opposite sex.

We are no evils because we menstruate. We are no divine because we do. May we – just – be equals!