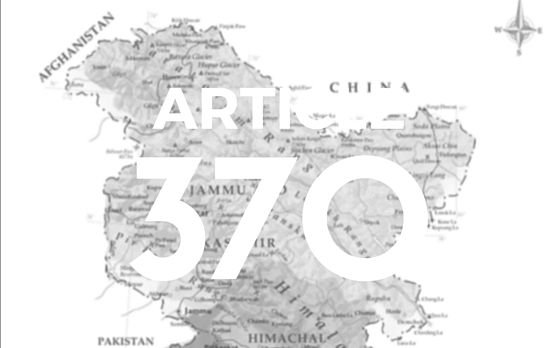 “Why should a state of the Indian Union have a special status? It conveys a wrong signal not only to Kashmiris but also to the separatists, Pakistan and indeed the international community that J&K is still to become an integral part of India, the sooner Article 370 is done away is better.”

The state of Jammu and Kashmir has been the cause of dispute, dissension and strife between India and Pakistan since 1947.

Ever since the instrument of accession was signed in October 1947, the state has fallen victim to a plethora of problems including Pakistan aggression on the border, communal unrest, terrorism and separatism. The “special autonomous status” accorded to the state of Jammu and Kashmir under Article 370 of the Indian constitution remains the most debatable issues today with contrasting views from different factions.

When was it formulated?

The Instrument of Accession was signed by Maharaja Hari Singh, the Maharajadhiraja of the Jammu and Kashmir state on October 26, 1947, following an infiltration of Pakistani tribesmen and consequent chaos. Sheikh Abdullah was made Prime Minister of the Interim government.

According to a letter written by Mountbatten to Raja Hari Singh, “as soon as law and order have been restored in Kashmir and her soil cleared of the invader, the question of the state’s accession should be settled by a reference to the people”, thus aiming at a plebiscite.

The provision for Article 370 was drafted by Sheikh Abdullah, Maharaja Singh and Nehru. Sheikh Abdullah wanted Article to be made a permanent provision in the Indian Constitution and wanted “iron clad autonomy” for the state which was not agreed by the Centre.

Sardar Patel’s role as the Home Minister in this prospect was minimized by Nehru. Maj. General Sheru Thapliyal, in an article, has stated, “Nehru is answerable to all acts of commission and omission, consequences of which we are suffering till date as far as J&K is concerned.”

As per this Article, the Parliament requires the consensus of the state for applications of all laws barring defense, foreign affairs, finance and communications. The residents of Jammu and Kashmir have separate laws for citizenship, property rights and fundamental rights.

Hence, other Indian citizens cannot purchase property in Jammu and Kashmir. Financial emergency under Article 360 of the Indian Constitution cannot be declared by the Centre in the state. An emergency can be declared only in the case of war or an external aggression. Hence, the Centre cannot declare the emergency in case of internal turmoil without the consent of the state.

Debate on its presence in the Constitution.

Has the Article remained unaltered? According to the Kashmiri intellectual and academician Amitabh Mattoo, one of the biggest myths that the “autonomy” as “envisaged by the Constituent Assembly is still intact.”

The Presidential Order of 1950 and the Delhi Agreement of 1952 have somewhat changed the relationship between the Centre and the State and have made most laws of the Union applicable to the State. Mattoo says that the current autonomy in the state is quite different from its former state. There is almost no institution in the Republic of India that excludes Jammu and Kashmir within its jurisdiction. The only significant exceptions are the Emergency provisions that cannot be applied to the state in case of internal disorders without the agreement of the State Assembly; and the name and boundaries of the state which cannot be changed without the approval of the state legislature. He says that “J&K is not unique; there are special provisions for several States which are listed in Article 371 and Articles 371-A to 371-I.”

Maj. General Thapliyal disagrees with the aforementioned view. According to him, the state remains aloof from India in many ways owing to its autonomy. “The beneficent laws such as Wealth Tax, Gift Tax and Urban Land Ceiling Act and intermarriage with other Indian nationals” are not applicable to the state.

The fact that the state of Jammu and Kashmir can refuse to allocate land for defense purposes has consolidated the autonomous status. Thapliyal says that Article 370 has time and again hindered the full integration of Jammu and Kashmir into the Indian Union. One often forgets that the state is not a “homogenous entity.” The Central government has practically given the “Veto power” to the State government.

Can it and should it be revoked?

According to Mattoo, the Article cannot be commended technically. As per Clause 3 of Article 370, the President may declare by the public announcement that this Article will be terminated but this can be done only on the recommendation of the Constituent Assembly of the State.

Hence, the Article can be revoked only if a new Constituent Assembly is summoned and approves of the repeal of the Article. The Parliament has the power to amend the Constitution to alter this provision.

“But this could be subject to a judicial review which may find that this clause is a basic feature of the relationship between the State and the Centre and cannot, therefore, be amended.”

However, Maj. General Thapliyal thinks that like Nehru had promised Article 370 had been a temporary provision and should have been repealed. However, it has been sixty years and that hasn’t happened. The Article is not being abrogated because of unwanted political interference not because it cannot be revoked. Whenever this topic is broached the pro-autonomy politicians protest saying that the legitimate rights of the Kashmiris are being crushed.

On being asked whether 1953 position can be restored as is being demanded by the State Assembly, Dhavan said,

“One view, held by many in Kashmir, is that too much has been acceded to by J&K to India. Kashmir needs real autonomy. It is for this reason that the state assembly passed a resolution demanding the restoration of pre-1953 position.

The other view is that whatever was done was done and you can’t turn the clock back. But it is nobody’s case that the existing autonomy can be taken away. There is no point in stirring up the debate on this issue. Either give more autonomy or keep the existing limited autonomy.”

Separatism is an endangering issue in Jammu and Kashmir. The people have time and again felt insecure about their individuality and their future. Article 370 is not empowering people but hanging the state by a thread.

Many development laws are not applicable to the state and the people cannot avail of these provisions in the Constitution. The separatist elements are taking advantage of this and Pakistan is supporting them thus adding fuel to the fire.

But prolonging Article 370 and continuing autonomy due to petty political reasons is not acceptable.

Like Mr. Siddharth Singh, editor of Mint says, “There are, of course, limitations to what Parliament can amend. In addition, the Supreme Court through the basic features doctrine has imposed limitations on this power of Parliament. The basic features of the Constitution (for example, the secular nature of the Republic and the separation of powers) cannot be changed. Article 370—a temporary provision—is certainly not a basic feature and as such there ought to be no bar against its repeal.”