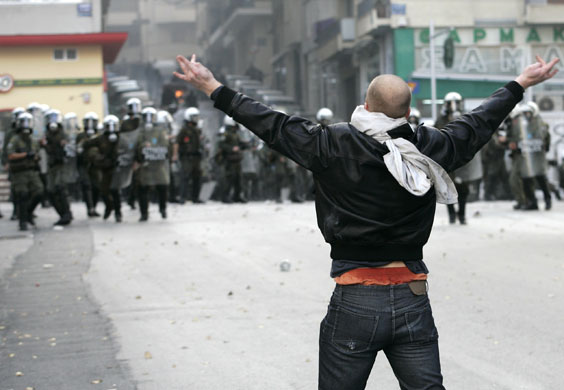 It has been only a couple of months since Europe started to seem quiet after the series of problems. But it seems like good days are not meant for Europe. After the things settled down especially on social media and mainstream news, might be because they’re busy covering the news on Russian airstrikes in Syria, age-old European crisis struggled to get in to the news.

Recently, Sweden induced border checks to control the influx of refugees as the numbers of asylum seekers rising every day and now, the numbers are more than hundreds of thousands.

Sweden is always among the first choices for asylum seekers due to its uncomplicated policies for refugees. Now, Sweden is in the boots of Germany, they want to accept refugees, but an uncontrolled number of asylum seekers makes it hard to say ‘yes’ to each and everyone. This move is creating the barrier to Schengen treaty and its integrity.

On the other hand, a fresh wave of protests started in Greece. After the Greek bailout referendum of 2015 results turned NO to austerity measured from Greeks, Greece got another bailout and became so-called “stable” for next few months.

Well, everyone knew that this bailout will not solve Greek problems, it will postpone the crisis until it becomes more serious. But, before the emerging financial problems would start, Greeks started protesting against anti-austerity bringing Athens under chaos.

Clashes between protestors and riot police are getting violent, making the conditions worse for the financially weak Greek government.

The time is taking a turn, and European countries are acting individually because the EU is unable to solve the problems, itself. The problems aren’t limited till here only, Brexit is also an upcoming serious concern to the European Union.

Efficient policies and measures are seriously needed to keep the EU united, standing against all the problems otherwise Britain is already set to leave the EU, and Greece and Spain could be next. A serious concern!