﻿ Rashmi Malapur Are We Turning Into An Intolerant Society? November 5, 2015 https://www.nakedtruth.in/wp-content/uploads/2015/11/Intolerance-Writers.jpg 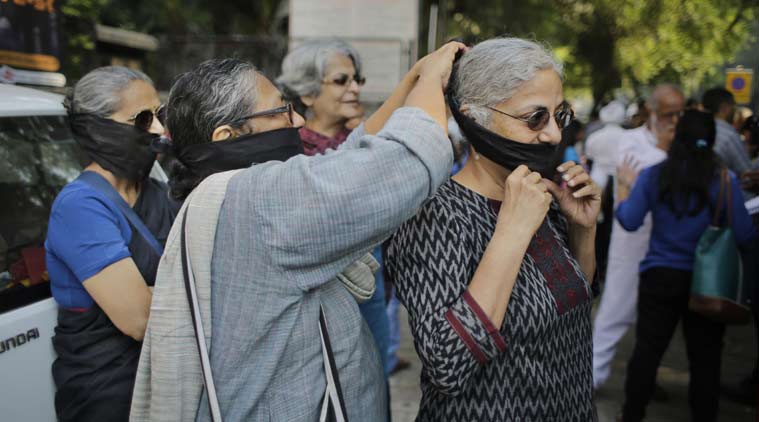 Shri Rabindranath Tagore renounced his knighthood as a protest against the Jallianwala Bagh massacre. Shocked by the atrocities of the British government, he chose to repudiate his knighthood.

It was truly a shameful and horrifying act by a government that was forced on us. It wasn’t an elected government nor was India, a democratic country.

Today, news keep flashing in newspapers and media that Indian writers are renouncing their awards against the growing intolerance in our country.

Great writers and rationalists are being murdered. And fanatics are thrusting their opinion, ideas and views on us. Muslims being attacked, two Dalit children being burnt by the upper-class community in Faridabad, the murder of Dr. Narendra Dabholkar, Comrade Pansare and rationalist Dr. M.M. Kalbugi is shameful for a democratic country.

I don’t think that I live in a democratic country anymore. Even while there is a severe protest, and people are openly shunning such horrendous acts through social networking sites, we have failed to find the culprits.

The essence of democracy is inscribed in our constitution as the right to speech and expression. Strong action needs to be taken by the government to track down the culprits and punish them. This is a huge challenge and India has never seen such intolerance in the past.

Even if you hear people express their opinion against these acts of violence, a large section of our society supports these acts of fanatic fury. Many are misled youths and thus, this is even more saddening. Different religions have peacefully co-existed in India. We have respected each community and we are a secular democratic republic.

I remember as child, we had friends from all communities in school and college. We studied, eat, discussed, and shared views openly. In fact, we celebrated each festival with as much enthusiasm and fervour, irrespective of religious beliefs.

So what has spoilt the fabric of Indian society? What has dented this tolerance and made us stand not together but, against each other? Is it the fanatic elements in the society that are playing mischief and not leaving even a chance to poison the mind of our highly tolerant Indian society?

To a great extent, YES, the fanatic elements are arresting our minds especially the youth, which is still not mature enough to understand the venom in their minds. Day after day, they are getting stronger and we have failed to come together on a common platform to take them to a task. People do protest but, we should work as a common force and writers have a huge role to play.

This is our elected government and we are not ruled by any foreign force. We have elected these leaders. So if they fail in certain aspects, writers should protest through their writings.

The renouncing award is one way of protesting according to them but, also writers should spread awareness in the society through writing against fanatic elements who are mischief mongers in our society.

They are like white ants who slowly nibble and break down the peace of our society. The duty as a writer is to shun these elements to make people aware of the essence of Indian society, which is ‘Unity in diversity’.

Didn’t we all co-exist peacefully earlier? Didn’t we respect each community? What has changed suddenly?

Ideologies, religious beliefs and cultures meet in India making it an envious country. No other country has this kind of diversity. Writers should hold hands together to protest through writing massively against injustices and atrocities.

If you believe in what I have suggested, share this with as many people as you can. Let us join hands together to become a more aware and tolerant society.

11 Rarely Known Festivals But Celebrated With As Much Excitement...