﻿ Avantika Chopra One Rank One Pension: The Real Purpose, Cause And Its Current State October 14, 2015 https://www.nakedtruth.in/wp-content/uploads/2015/10/OROP.jpg 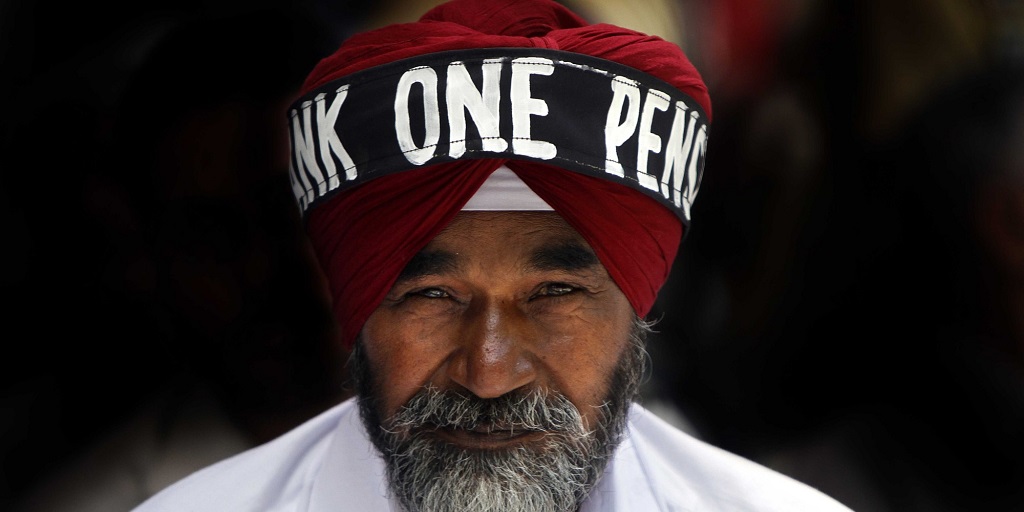 One Rank One Pension: The Real Purpose, Cause And Its Current State

There are events, incidents and issues that have been happening every day but not all of them get reported. One out of the many is the OROP ruckus that has been going on for a long time now. Many have heard about it, but only handfuls know the cause and current state of the same. To understand the matter in detail, one must go to the very core of the issue.

OROP stands for One Rank One Pension; each individual of a certain organization is to be given the same pension for the same rank irrespective of the date of retirement. This was the basis of determining the pension of the Indian Armed forces until 1973. Things changed, when under the tenure of Indian National Congress, the same scheme was terminated. The termination was followed by a drastic drop in pension percentage (from 70% to 37%) causing a lot of opposition by the Armed Forces.

The conflict aggravated in 2008, when after repeatedly dismissing the OROP request of the Armed Forces and veterans, the UPA government granted the same to the present and future civil servants. This grant started the era of protests and strikes by the veterans of the Armed forces. It was an unfair grant which increased the pay-pension gap between the defense and the civil servants.

This issue continued for a while with no solution. A ten-member committee known as the Koshyari committee was formed to solely study the matter and come up with the right decision. After thorough research, numerous hearings and evidence, the committee, in December 2011, strongly recommended the implementation of OROP for all ranks of the defense services. They felt that the armed forces rightly deserve the implementation of OROP. Even after this, the government remained indifferent to the cause and continued postponing the OROP grant to the Armed forces.

Even after countless strikes and protests by the veterans, the issue was more or less kept under discussion. It remained untouched till the 2014 elections. Knowing the sensitivity of the issue, the competing parties tried to gain support and votes by committing to the implementation of the OROP for the defense services. Claims and promises were made regarding the same and it was one of the main manifestos of the BJP elections. This brought the issue in light again and the expectations rose from the BJP government once it came in power.

Unfortunately, the BJP government lacked the energy, it exhibited during the elections. The issue yet again was put under discussions. The matter was delayed and the implementation process was slower than expected.

These constant delays and false talks broke the patience of the veterans. On 15 June 2015, a full-fledged protest was started by the veterans opposing the slacking behavior of the government and slow implementation of the OROP.

The government tried to suppress the protests with false speeches but this time the anger could not be easily subsided. The protests continued but with peaceful and disciplined rallies.

Patience broke, yet again, when the government ordered the eviction of the protesting ex-servicemen in Jantar Mantar pre-independence, calling them a threat to the country. This statement was not only criticized, but it added fuel to the already existing fire. It angered the ex-servicemen to be considered a threat when they themselves had fought for the safety of this country.

Seeing the matter go out of hand, on 5th of September, the government announced the implementation of OROP scheme for the Armed forces; this scheme, unlike the original OROP, was diluted.

The rally was held at Jantar Mantar on 12th of September. It was led by Major General Satbir Singh, Group Capt. V.K Gandhi along with Colonel Inderjeet Singh. More than eighty thousand veterans, families and civilians came to support the cause. Harley-Davidson’s group of bikers also came out to support the OROP, strengthening the cause. To aid the cause, ex-servicemen voluntarily donated money and services for the same.

Seeing the growing attention and support, the cause was getting, the government tried various ways to suppress the protests. The media was barred from covering any of the rallies or strikes that were taking place, the funding accounts were blocked to break the income source, more than 200 buses, carrying the supporters, were stopped from reaching Jantar Mantar on the 12th of September. False news of cancelation of the rally was spread across media channels. Fortunately none could hamper the conviction and dedication of the protesters.

The protest has completed its 118th day on 10th October. The rallies are still going on every Sunday at Jantar Mantar and the OROP scheme is still not implemented in its true form. The talks, like always, are still on and there is not much the government has done to sort the issue. More than 500 veterans are ready to go on hunger strikes and constant boycotts by the ex-service men of important events like the Air Force day, the Independence Day and the 1965 war celebration is a constant reminder to the people that how angry and hurt these men are.

A lot more is being done than what meets the eye. There are soldiers fighting for this country, keeping it safe. These men deserve the respect, they have rightly earned after they retire as well. It’s shameful that a country with the second largest Army is degrading its soldiers like this. They have already earned the pension they are demanding and should be rightly given so. No excuse is good enough to not grant the One Rank One Pension scheme.

A Trip To The ‘Dilli Ka Dil’: Chandni Chowk