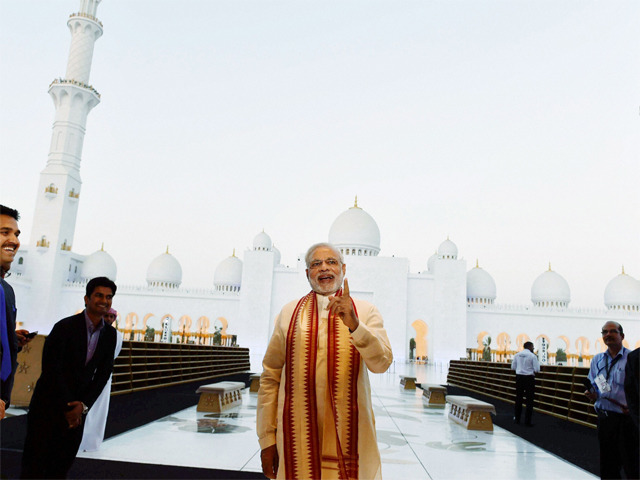 A lot has been said about the fraternity between Indians and Pakistanis in the UAE. They don’t like each-other’s governments, and don’t hesitate in being vocal about it.

But this animosity ends at the government level, it doesn’t extend to the citizens, at least in the eyes of the public.

No matter what’s going on in their countries, whether it’s riots, blasts, or even cross-border shelling, these two communities have largely remained unaffected, going about their usual 9 to 5 jobs, travelling with each other in the metro, sharing their meals.

Everything was alright until it was announced that Indian Prime Minister Narendra Modi would be visiting the UAE. The Indians, obviously, were excited. An Indian prime minister was visiting the UAE after over three decades, the last visit being that by Indira Gandhi.

Indians form the largest nationality in the UAE, at 2.6 million, outnumbering even the Emiratis. Therefore, the announcement was long due.

Note: UAE locals are called Emiratis, not Arabs. Arabs is a general term that applies to citizens of all countries in the Gulf region, mainly Saudi Arabia, UAE, Yemen, Oman, Qatar and Kuwait.

To put things into perspective, Kerala chief minister Oommen Chandy visits the UAE half-a-dozen times a year, perhaps even more. The visits are so frequent that they no longer make news. Keralites, after all, form the majority of Indian diaspora in the UAE.

Preparations for Modi’s visit started a month before his arrival. The cricket stadium was booked when no suitable venue could be found. The stadium can accommodate around 25,000 people, and surrounding grounds can make room for 5,000 more. Within two days, over 50,000 people had registered for the event.

It was at this point that old issues long dead and buried raised their heads again. Well, they were not really dead and buried, let’s just say people didn’t talk about them anymore.

People were suddenly talking about the Godhra riots, the demolition of the Babri Masjid, infiltrations by India’s RAW, and atrocities by the Indian army in Kashmir. Modi was labelled a murderer.

Note: Indian and Pakistani media maintain opposite accounts on any news related to cross-border infiltration, attacks, or blasts. The Pakistani media and officials blame the Indian intelligence agencies for infiltrations and attacks just as much as the Indian media and officials blame Pakistan’s ISI. RAW is the villain for Pakistani media. For Indian media, the villain is ISI. Their civilian is our terrorist, our fisherman is their militant. Panel discussions on Pakistani channels are as convincing as a debate moderated by Barkha Dutt or Arnab Goswami. Sitting in Dubai, where I have unrestricted access to media from both countries, it’s difficult for me to judge who is more to blame.

Now back to Modi’s visit.

While Indian media ranted about the tiniest detail of Modi’s forthcoming visit, the Pakistani channels had panel discussions on why a politician who was until a few months back banned from entering the United States being allowed to visit the UAE.

As expected, it didn’t take long for the political visit to take a religious twist.

Modi was shown as anti-Muslim. Pakistani media questioned why madrassa education in India was derecognized. They implored that Modi not be allowed to enter the Shaikh Zayed Mosque in Abu Dhabi because he had the blood of several Muslims on his hands.

Several Facebook and Twitter accounts sprung up overnight, spreading the anti-Modi agenda. Even the mailboxes of the publication I work for were flooded with hate speeches, gory pictures, images of flags burning, militants being tortured, just to make obviously clear their resentment against this ‘killer’.

Unfazed by all this commotion were the Indian Muslims. Muslims form the majority of Indians in the UAE, and they mainly come from Kerala and Gujarat. For them, their leader was coming. The excitement could be heard wherever I went. In trains, malls, markets, office canteens…everywhere.

The Bohra community, which mostly hails from Gujarat, was perhaps the most excited. Theirs were the most visible faces when Modi began his speech. They had put behind the bloody past of 2002, when hundreds of Muslims were massacred under Modi’s tenure as chief minister. Today, Muslims from the same state were waiting for the same leader.

It was perhaps this forward-thinking attitude that didn’t go down well with Pakistan media channels. Had Indian Muslims shunned Modi, maybe Pakistani commentators would have gone easy with their bashing. When Modi began his speech, Pakistani TV channels cut to footage of dilapidated mosques in India and construction of temples. They discussed the plight of Muslims in a Hindu country. Hindu, not secular. Perhaps they forgot that Muslims from the same ‘Hindu’ nation outnumber Muslims in their own country. They even wanted the Shaikh Zayed Mosque to be thoroughly washed as soon as Modi left.

This negativity even spread to the Pakistani expats. They started questioning why the visit was being given so much importance. They took to bashing each other on social media. Anti-India sentiments broke all records on social media that day.

I don’t recollect the last time a leader from Pakistan came to UAE. If they do in future, I am sure it will not be met with such hostility.